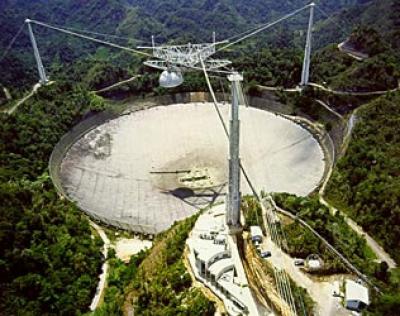 Astronomers using the Arecibo telescope have discovered a fast-rotating pulsar that doesn’t fit the accepted notions of how those exotic, lighthouse-like stellar objects form. Pulsars get their name from the brief beams of light they shoot our way every few milliseconds or more.

Scientists think they typically form as a kind of strange byproduct of a star’s death, and end up orbiting a white dwarf. But a group led by David Champion of McGill University says that the new pulsar, PSR J1903+0327, actually orbits a Sun-like star. In other words, a star that hasn’t gone supernova, blowing off its outer layers and condensing into a white dwarf or a neutron star. The new pulsar is also fast – it rotates every 2.15 milliseconds, or 465 times per second – which normally means it should be flying around its host in a circular orbit. But that’s not the case here.

Naturally the astronomers plan to study the pulsar further to find out more, but for now they think it may have been born elsewhere, forming in a global cluster, perhaps, and then getting ejected and finding its way to its present location. “Pulsars like this are why you do these surveys,” says Champion. “You don’t want to just find hundreds of objects, you want to find the two or three that are plain weird and we’ve found one.”

The work is published in the online version of the journal Science.