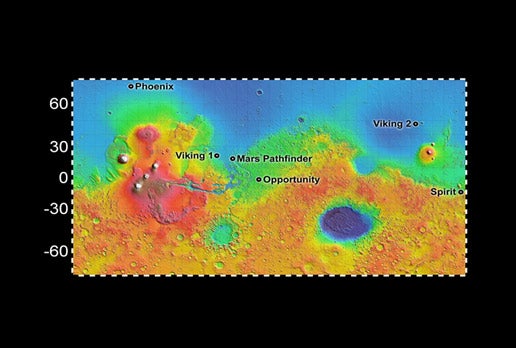 Just because NASA has two robots on the surface right now doesn’t mean the landing of the Phoenix probe is a sure thing. At a news conference yesterday, NASA officials stressed that landing a spacecraft on Mars isn’t easy: 55 percent of all attempts to do so have failed. Not to mention that the technique Phoenix will use to do so hasn’t been employed in a while. Instead of airbags designed to cushion its impact, the lander will fire rockets that slow its descent and, ideally, allow it to settle down softly.

Everything has been proceeding smoothly so far. The spacecraft has had a drama-free ride to the Red Planet. But once it enters the Martian atmosphere at nearly 13,000 miles per hour, the so-called seven minutes of terror begin. Phoenix will have to slow down to five miles per hour before touching down. If all goes according to plan, it will start getting comfortable in its new home at 7:36 EDT on May 25.