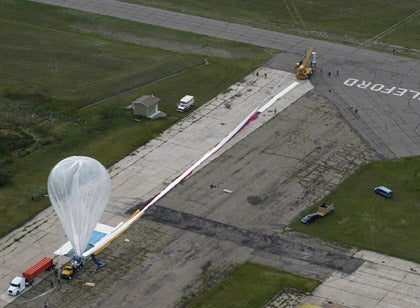 Michel Fournier’s latest attempt at the highest parachute jump record—which was to have taken place this past Memorial Day weekend—has come to an unfortunate end. The $200,000 helium balloon which was to have lifted Fournier and his capsule 130,000 feet into the atmosphere detached unexpectedly as it was inflating and drifted away. The flight and jump was originally to have taken place on Monday, but was postponed due to threatening weather and winds. The rescheduled launch for yesterday morning was on track and appeared to be running smoothly until the balloon suddenly rose from the ground without the capsule.

It appears to have been a purposeful abort of the launch due to a technical issue, but Fournier and his team have yet to release any details. The balloon was found about 25 miles away from the launch site and is currently being studied to determine what went wrong. Whether this latest setback will prove to be the end of Fournier’s bid at the record book is still an open question. He has run into snafus and financial shortfalls before, but this now makes the third unsuccessful attempt, at a cost of more than $650,000.