An exotic meteorite fails to garner interest at an auction, but bidders jump at fossilized feces 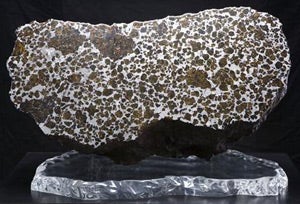 In an auction battle between two odd items yesterday at Bonhams New York, a few fossilized pieces of 130-million-year-old dinosaur dung sold for nearly one thousand dollars, but a 4.5 billion-year-old meteorite didn’t find any takers.

Here’s the auction house’s glowing preview for the rock:

Weighing more than 925 pounds, the Fukang meteorite is expected to bring in a figure in excess of a $2m at the auction. Its rarity, impressive size and superlative quality combine to make this piece one of the most valuable meteorite specimens in history.

Discovered in Fukang, Xinjiang Uygar Province, China in 2000, Fukang is widely acknowledged as the world’s preeminent pallasitic meteorite and is arguably one of the most magnificent meteorite finds of the 21st century.

Maybe that was a little pricey, even for space lovers. Still, the rock’s owner, Marvin Kilgore of the university of Arizona’s Southwest Meteorite Center, was reportedly a bit bummed that folks got more excited about dino-dung than his exotic treasure.