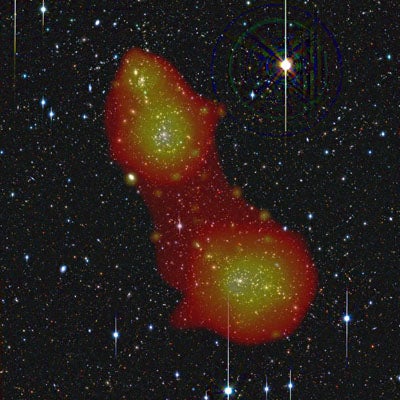 Granted, it might not seem like such a big deal when astronomers find some of the missing mass in the universe, since there’s very little that isn’t missing. Roughly 95 percent of the cosmos is either dark matter or dark energy. About five percent of the universe is made up of the normal mass we’re familiar with–baryonic matter. Yet by adding up the known stars and galaxies and gas, astronomers have only accounted for about half of that five percent.

Now, scientists using the XMM-Newton, ESA’s super-sensitive detector, have begun to pick up some of that missing mass by studying X-ray emissions coming from tendrils of gas stretching between two galaxy clusters, Abell 222 and Abell 223. These gaseous filaments connect many other galaxies in the universe, forming a kind of cosmic web, and studying those other links will be the next task. “This is only the beginning. To understand the distribution of the matter within the cosmic web, we have to see more systems like this one,” says astronomer Norbert Werner. “And ultimately launch a dedicated space observatory to observe the cosmic web with a much higher sensitivity than possible with current missions.”