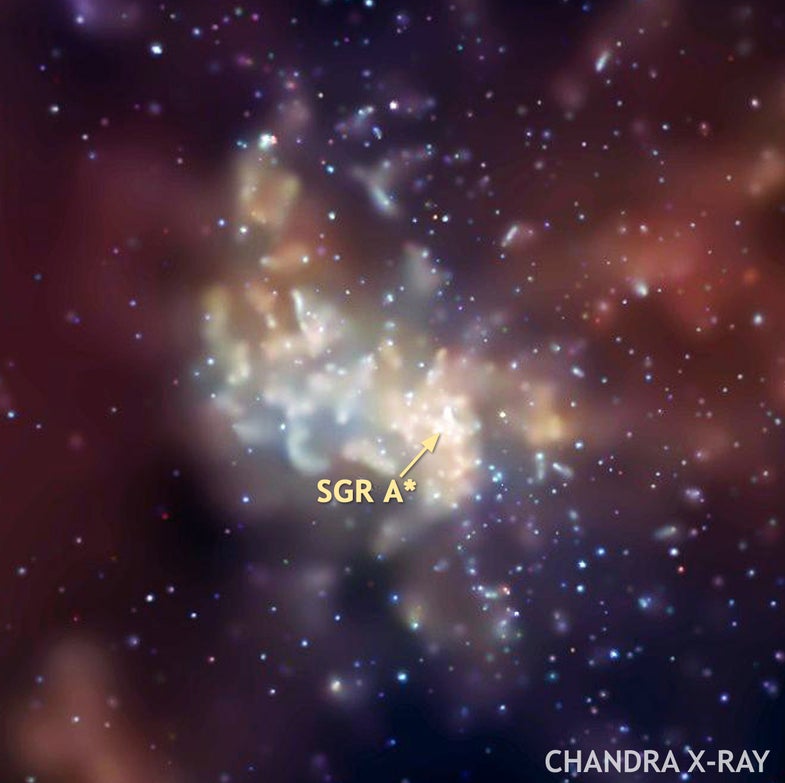 Chandra's image (left) has provided evidence for a new and unexpected way for stars to form. A combination of infrared and X-ray observations indicates that a surplus of massive stars has formed from a large disk of gas around Sagittarius A* (illustration on right). According to the standard model for star formation, gas clouds from which stars form should have been ripped apart by tidal forces from the supermassive black hole. Evidently, the gravity of a dense disk of gas around Sagittarius A* offsets the tidal forces and allows stars to form. The tug-of-war between the black hole's tidal forces and the gravity of the disk has also favored the formation of a much higher proportion of massive stars than normal. Chandra X-ray Observatory Center
SHARE

It packs 4 million times more material than our sun, but relative to the black holes sitting at the center of some neighboring galaxies, it actually doesn’t do all that much. The fact that this black hole, known as Sagittarius A*, kicks out billions of times less energy than others of its kind has made it something of a mystery. But now a team of scientists at Kyoto University suggests that Sagittarius A* may be resting after a far more active period a few centuries ago.

The group has demonstrated that the black hole spat out a powerful burst of x-rays about 300 years ago, and has been relatively calm ever since. They figured this out by picking up traces of this x-ray outburst and its effect on a giant gas cloud called Sagittarius B2. The black hole’s energy heated up the cloud, forcing it to glow brightly. Once those x-rays passed through, though, the cloud settled down to its normal state again. “By observing how this cloud lit up and faded over 10 years, we could trace back the black hole’s activity 300 years ago,” says Katsuji Koyama of Kyoto University. “The black hole was a million times brighter three centuries ago. It must have unleashed an incredibly powerful flare.”