For the third time in five years, a returning Soyuz spacecraft misses its mark. 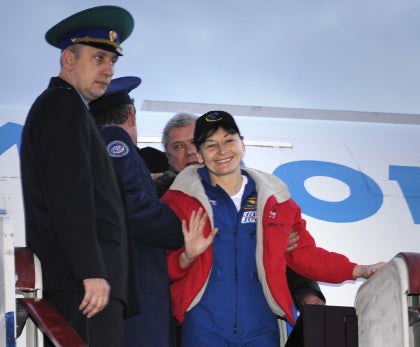 The three members of the 16th International Space Station crew experienced a “ballistic trajectory” while returning from the station to the steppes of Kazakhstan in their Soyuz capsule on Saturday. Translation: Their spacecraft fell to earth like a lead weight, subjecting them to double the g-forces expected.

The astronauts did not suffer any lasting injuries, but the mishap has raised questions about what caused the Soyuz to deviate from its planned trajectory and land almost 300 miles short of its target. It was the second time in a row, and the third time in five years, that the Soyuz has veered off course. Officials say none of the incidents were caused by the crews.

Aboard the Soyuz were American Peggy Whitson, commander of the station expedition; Russian Yuri Malenchenko, who piloted the Soyuz; and Yi So-yeon, the first South Korean astronaut to visit the station. Whitson has spent more time in space than any other American astronaut: a total of 377 days. But the Russians are the champions of long-endurance space flight: 19 cosmonauts have bested Whitson’s record. Malenchenko has 515 days under his belt, and he’s only in ninth place.