New Spacecraft Links up With ISS 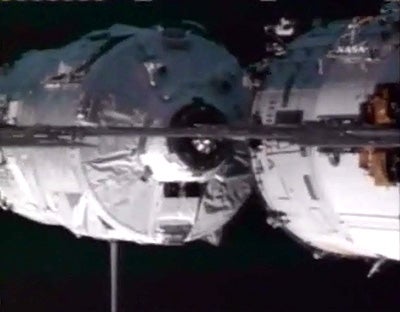 The European Space Agency’s Automated Transfer Vehicle, Jules Verne, successfully linked up with the International Space Station yesterday. The ship’s mission is to deliver cargo, fuel, water and oxygen. But yesterday’s success is also a coup for ESA in that the space agency has finally joined “the club”: Now Europe can get to the ISS on its own, without help from Russia or NASA.

After holding steady roughly 24 miles from the station and performing some final checks, the 19-ton craft crept towards the ISS, approaching in close at a relative velocity of less than three inches per second, or less than a mile an hour. The approach and docking process was all automated, but it was constantly monitored by engineers on the ground and the crew inside the station.

ESA officials are understandably proud of their baby. “The ATV is so much more than a simple delivery truck, it is an intelligent and versatile spaceship which has just demonstrated its extraordinary skills,” according to Daniel Sacotte, ESA’s Duman Spaceflight, Microgravity and Exploration Programs. “It is the largest and most complex spacecraft ever developed in Europe and the second in size of all the vehicle’s visiting the Station, after NASA’s space shuttle. With Columbus and the ATV, we have entered the major league of the ISS.”