Can It Be True? Rocket Racing League Announces Exhibition Flights

If all goes well (fingers crossed!), we’ll see rocket racers in the air this summer. 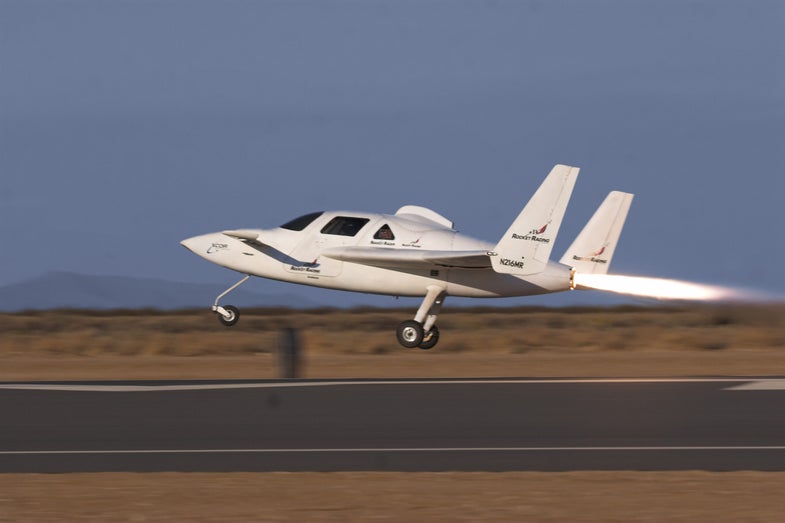 Don’t count the Rocket Racing League out just yet. After a lengthy delay and intimations of its demise, the league has finally announced exhibition flights. Pending FAA approval, a ten-minute flight will take place the first weekend of August at this summer’s EAA Airventure festival in Oshkosh, Wisconsin. Granger Whitelaw made the announcement this morning at a press conference in New York, admitting that the news was coming some fifteen months later than he had hoped. “I will take full responsibility” for the delay, he said.

The small group of journalists and Rocket Racing League-affiliated businessmen of various stripes watched the Rocket Racer fly—that’s right, it has actually flown—in two videos. In one video the racer pulled off a key maneuver: cutting the engine midair and firing it up again. (Throttle control will be essential during an actual rocket race—the small racers can only hold a small amount of fuel, so pilots will have to be cut and fire the engine strategically throughout each flight.) If all goes well, the league will fly three more exhibition races in 2008: the Reno Air Races in September, the X Prize Cup in Las Cruces, New Mexico (date TBD), and Aviation Nation in Las Vegas on November 8-9.

Other announcements made this morning:

-The Rocket Racing Composite Corporation, a subsidiary of the Rocket Racing League, has acquired the experimental airplane manufacturer Velocity Aircraft. The idea is to eventually transfer tech from the Rocket Racers into private luxury planes that Whitelaw called the Maybachs of private aircraft.

-Tenacious [X Prize](http://www.xprize.org/ target=) Lunar Lander Challenge competitor [Armadillo Aerospace](http://www.armadilloaerospace.com/n.x/Armadillo/Home/ target=) has signed up to provide reusable ethanol/LOX engines for the Rocket Racers. Armadillo will be the second company, after XCOR, to supply engines to the RRL.