The Space Station’s New Robot Repairman Might Need a Jolt

Engineers are hopeful that Dextre will be up and running soon 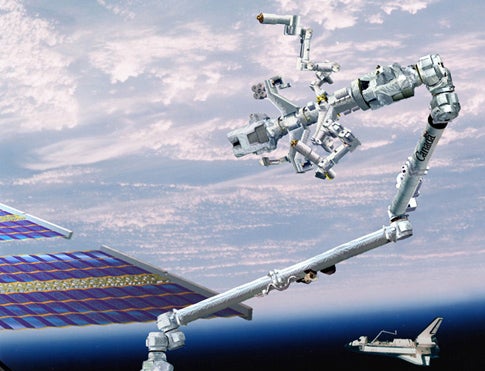 An artist's conception, mounted on the ISS's Canadarm2. MDRobotics
SHARE

The International Space Station’s new robotic repairman, a $200 million Canadian robot called Dextre, should end up working just fine despite some early glitches, officials say. Dextre, an incredibly dexterous ‘bot with two flexible three-meter arms (hence, of course, the name), is designed to be a kind of maintenance machine on the outside of the ISS. Working in tandem with the station’s “Canadarm2” arm, Dextre should be able to perform basic servicing tasks that are now carried out by astronauts, thus reducing unnecessary spacewalks.

The system so far hasn’t been able to route power to the robot, and Canadian engineers say they initially tried a software patch to fix the problem, but that didn’t work. Now they say the issue may stem from a design flaw in a cable that’s supposed to be in charge of getting power to the robot on a temporary basis, while it’s still being installed. The good news, they say, is that once astronauts finish putting the robot together, and that temporary system is no longer necessary, the power, and Dextre, should start running smoothly. Good thing—every spacecraft needs an R2-D2, right?