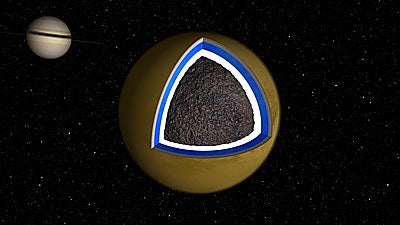 The Cassini probe has found evidence that there may be an underground ocean on Saturn’s moon Titan. The moon is already an area of tremendous interest to planetary scientists, given its dunes, lakes and mountains. It also has one of the most Earth-like surfaces in the solar system. Now, by using radar measurements to detect changes in the moon’s rotation, scientists have gotten more insight into what’s below the surface.

At this point, scientists think that there may be an ocean of liquid water and ammonia sitting some 60 miles down beneath the surface.

A paper describing the work appears in the current issue of the journal Science. The Cassini group is planning to take another close look at Titan today, when the craft will study the moon’s upper atmosphere.