First-Ever Photos of Avalanches on Mars 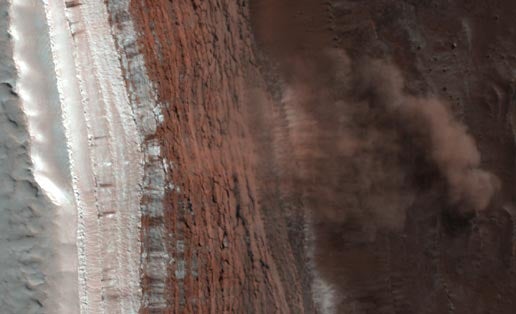 Yesterday, NASA released more than two thousand images from the high-resolution camera onboard the Mars Reconnaissance Orbiter, a spacecraft looping around the Red Planet. One of the highlight photos, taken February 19, shows the cloudy aftermath of an avalanche of ice and dust rushing down a steep slope. The image surprised scientists, and proved that Mars is not just some planet-sized museum, but a very active world.

“It’s great to see something so dynamic on Mars,” says Ingrid Daubar Spitale of the University of Arizona, Tucson, who first spotted the avalanche. “A lot of what we see there hasn’t changed for millions of years.” The photo wasn’t taken intentionally—scientists pointed the camera towards that area to check for seasonal changes in a carbon-dioxide layer on a particular dune field. Now the scientists plan to try to figure out what triggered the landslides. For more images from the spacecraft’s high-res camera, check here.