Kids aren’t the only ones who think fake diamonds are hot. Engineers at Ohio State University are using zirconium dioxide (the ceramic from which we get synthetic diamonds) to protect jet engines from high-temperature corrosion.

The fan blades in modern aircraft engines are coated with a protective ceramic to keep them from overheating. When the metal heats up, it expands, and the ceramic coating expands with it. But when grains of sand are inevitably sucked in and contact the many thousand-degree blades, they melt and make glass. The glass not only breaks down the coating when hot, but when it cools, it forms an inelastic layer on top of the protective coating. When the blades heat up again, the glass doesn’t expand and breaks off the ceramic, shortening the life of the engine. 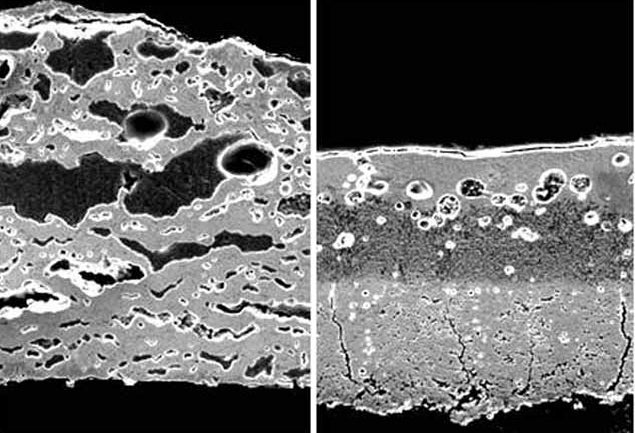 On the right, the zirconium coating protects from the molten glass. The left, with its conventional coating, is easily damaged.

The promise of the zirconia lies in its ability to force the glass to bond with other elements in the coating, changing it into a stable crystal. It in effect turns the glass into an additional layer of protective ceramic every time new sand contacts the blades and melts.

Unlike the ring for your middle school girlfriend, this zirconium application doesn’t come cheap. It’s a cost-intensive process to manufacture and has yet to be tested on complex shapes. But even in its early stages, it promises to be a boon for efficiency not just in aircraft engines, but ultimately for automobiles as well.