Is that a Drone in Your Pocket? 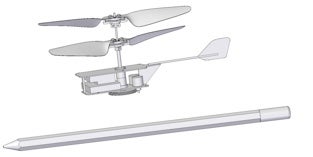 Two years ago we wrote about Norwegian engineer Petter Muren’s effort to build a mini copter weighing only 3.3 grams. that radio-controlled craft, the Picoflyer, could take off from the palm of your hand. Now Muren has designed the larger but more capable Black Hornet.

It will still only weigh 20 grams, and will stretch just 4 inches long. Muren, who holds the record for designing and building the world’s smallest remote-controlled helicopter, says the Black Hornet will be able to fit in your pocket, and users will be able to launch them in under a minute. Equipped with a tiny video camera, the Black Hornet could be used to give soldiers another set of eyes in the sky, or allow rescue or emergency workers to peer inside contaminated or otherwise dangerous buildings.

Muren and his new company, Prox Dynamics, hope to release the first Black Hornet by 2009, and start shipping the tiny fliers to customers a year later.