The Building Blocks of Dark Matter? 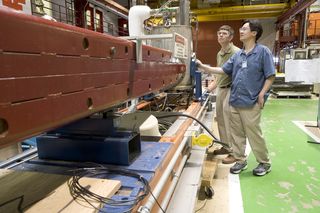 The title of the paper might not jump out at the average science fan—”Search for Axionlike Particles Using a Variable-Baseline Photon-Regeneration Technique”—but the big idea behind the research certainly should. Physicists at Fermilab have designed an experiment to look for the particles that may make up dark matter—the elusive material that may make up most of the matter in the universe.

Scientists say that one of the prime candidate particles is the axion, which is 500 million times lighter than the electron, and does not have the fundamental quality known as spin. In the end, the experiment didn’t turn up evidence of these particles at the energy range they explored, but the scientists do plan to keep looking. Another potential target: The theoretical particles known as chameleons, which, as you might have guessed, supposedly have the tendency to change their properties in different environments.