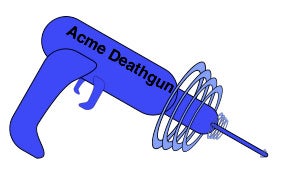 The U.S. Defense department has tested some spooky weapons, but those involving mind control and telepathic attack may be near the top of the list. A newly declassified 1998 document released under the U.S. Freedom of Information Act (download the pdf here), describes potential weapons for crowd control, such as a microwave gun that could beam words directly into people’s ears, and an electromagnetic pulse that causes epilepsy-like seizures.

The report also discusses a weapon that can heat a victim’s body internally, producing an artificial fever. It is unknown whether the fever-inducing technology was actually tested, but the report notes that the equipment needed “is available today” and that the resulting fever would keep a victim incapacitated for “any desired period consistent with safety.”

In an interview with New Scientist, Steve Wright, a UK security expert at Leeds Metropolitan University, warned that such technologies could be used for torture. “The epileptic seizure-inducing device is grossly irresponsible and should never be fielded,” He said. “We know from similar artificially-induced fits that the victim subsequently remains ‘potentiated’ and may spontaneously suffer epileptic fits again after the initial attack.”