As the Navy readies itself for the first satellite shoot-down, questions still linger as to its intent 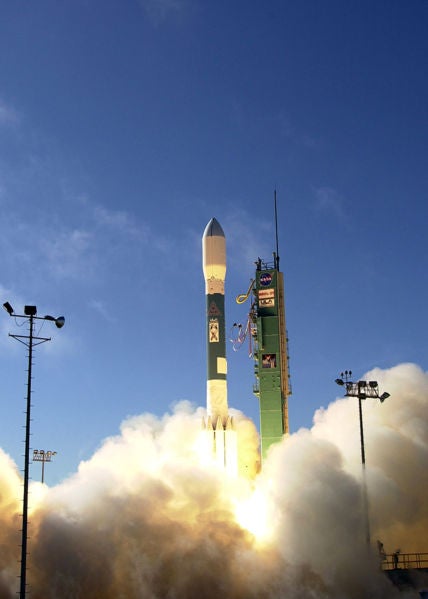 By now you’ve probably heard the strange story of USA 193, the out-of-control military satellite slated to be shot out of the sky this evening. Amidst controversy over the safety and necessity of the mission, the U.S. Navy is planning to launch a $10-million missile from the USS Lake Erie somewhere west of Hawaii as early as 9:30pm EST and take the school-bus-sized sat down.

Launched in December 2006 by the ultra hush-hush National Reconnaissance Organization, the rogue satellite sported a powerful imaging sensor and a central computer that failed almost immediately. Its orbit began to decay, gradually and then suddenly. And when it became clear that the satellite would plummet to Earth this week, the government grew concerned that its 1,000 pounds of onboard fuel would survive the plunge and pose a health risk to anyone who came in contact with the hydrazine gas. That’s their side, anyway—and their explanation for preparing three SM3 anti-ballistic missile interceptors to shoot the bugger down from an Aegis destroyer.

It’s also distinctly possible that they’d just rather not have key parts of a top-secret spy satellite splatter across random swatches of Commie (or any of the extremist groups we’re afraid of these days) real estate. Some even speculate they’re taking the opportunity for some practice shots. In the past week, Russia and China have been increasing crying foul, claiming this is a way for the U.S. to retaliate against China’s unpopular anti-satellite weapon test by trying one of its own. In the last five years 328 satellites have fallen from orbit to earth without government intervention; the Pentagon argues none have had so much toxic hydrazine aboard.

The criticisms and conspiracy theories stem from the fact that the costs of the mission may be greater than the benefits. Debris from the destruction of the satellite could go spaceward instead of earthward, and though the Navy is taking great care to aim at an altitude low enough to prevent that, there’s a possibility other orbiting bodies—even the International Space Station—could be hit. An imperfect but interesting calculation by geographer Tim Gulden puts the probability of the satellite landing in a populated place on Earth or dinging the ISS at about even.

The odds of both events actually occurring are fairly slim, but if you felt tempted to place a bet on where the satellite will land, you wouldn’t be alone. Internet bookie betus.com has posted a number of wagers on where the USA 193 will end up after this evening’s planned shoot-down. The site is currently posting 1-to-3 odds that it hits ocean and 1-to-a-trillion odds that it wakes up the Cloverfield monster. Of course, if that happens, good luck getting your money.