Off-Roading on the Moon

A concept Moon-mobile is rugged, roofless and a breeze to parallel park 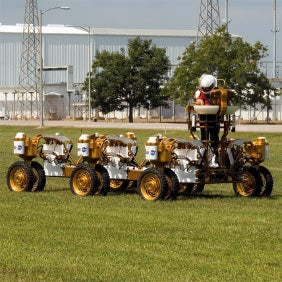 Engineers at Johnson Space Center in Houston this week released a design for a rugged lunar vehicle that astronauts could one day drive around the Moon. The truck has six wheels, no doors or roof, all-wheel drive, and it would be ideal for parallel parking. That might seem superfluous—sure, a few other nations have Moon base goals, but it’s not like it’s going to be that crowded up there—but NASA officials say this extra maneuvering ability could help astronauts navigate craters and steep slopes, and make it easier to pull up to the base and either re-charge some batteries or pack or unpack payloads.

It looks like driving the thing would be pretty fun, too. Instead of sitting in a stationary seat, you’d stand at the wheel, and be able to rotate 360 degrees. The concept vehicle is just that, though—NASA could still end up choosing a completely different design for its featured lunar ride