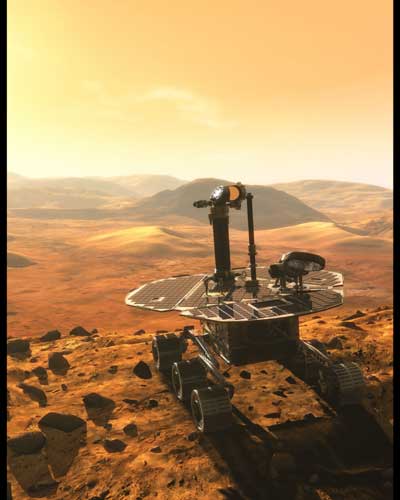 When NASA’s Phoenix lander parachutes from orbit and touches down on the outskirts of Mars’ northern polar ice cap on May 25, it will join the Spirit and Opportunity Mars Exploration Rovers as NASA’s active roster on the planet’s surface. And, as is typical of the youngest child, Phoenix will receive the majority of NASA’s attention during its mission.

Phoenix is expected to land on the permafrost-like terrain and spend the bulk of its time scooping away topsoil so it can scrape through sub-layers of ice. (With the data it collects, scientists can better understand the planet’s water history and possibly gain insight as to whether Mars harbored life.) But, because the climate at the pole is so harsh compared with that of the equatorial hills the rovers roam–think Siberia versus Brazil–the lander probably won’t live much past its 90-day mission life.

So, during this window NASA will direct most of its bandwidth to communicating with–sending commands to and receiving images and data from–Phoenix.

But don’t feel too sorry for the rovers: When they set out on their mission they were only expected to put in 90 days of work. Both recently eclipsed 1,400 days of service. “The rovers voided their warranty years ago and they’re still going,” says Steve Squyres, the Cornell University astronomy professor who runs the rover show.

Combined, the information from the rovers and Phoenix should help NASA pinpoint the landing site for Mars Science Laboratory–next to Spirit and Opportunity, MSL is the Lamborghini of Mars rovers–which is scheduled to land on the Red Planet sometime in the summer of 2010.