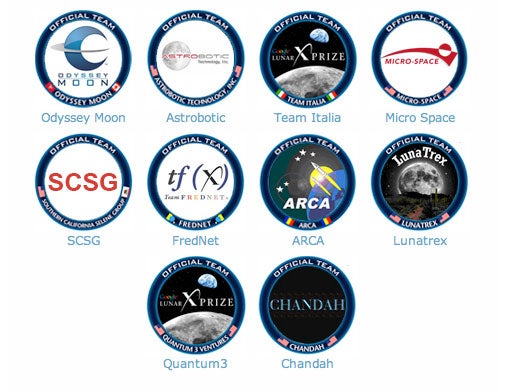 Today at a press conference at Google’s Mountain View, California headquarters, the X Prize Foundation announced the 10 official competitors for its $30 million Google Lunar X Prize. It will not be an easy thing to win. To qualify, a team must land a privately funded spacecraft on the moon, rove at least 500 meters, and beam a particular set of video, pictures and data back to earth. Oh, and ideally it will do this within the next four years, because after December 31st 2012, the purse drops to $15 million.

Bonuses are available for teams that can pull of feats ranging from finding ice on the moon to finding artifacts of earlier moon missions. Despite the obvious difficulty of pulling this off, the foundation received over “567 expressions of interest from 53 nations,” according to X Prize chairman and CEO Peter Diamandis. The ten official competitors hail from as far afield as Romania. If you followed the Ansari X Prize you’ll see some familiar names in the final list.