Jules Verne Gets Ready to Launch Into Space 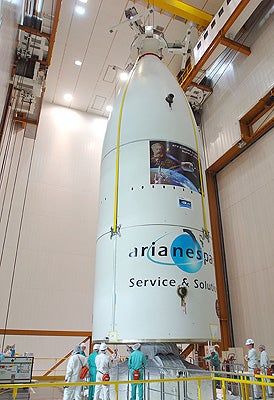 Soon, NASA’s shuttle won’t be the only workhorse servicing the International Space Station. In a little more than a week, it will be joined by the European Space Agency’s Automated Transfer Vehicle, the Jules Verne, which is entering the final preparations before launch. The Jules Verne is the first of a series of such supply ships that will lift food, air, water, science supplies and other equipment to the ISS roughly once a year. ESA likens the ATVs to tugboats or river barges, albeit incredibly advanced ones.

After docking with the Russian module, the Jules Verne will remain in place for up to six months, acting as a kind of giant trash receptacle, and then crash back towards Earth, destroying itself high above the Pacific Ocean. Quite a way to take out the trash, right?