A star speeding through space at 1.6 million miles per hour suggests the first evidence of a massive black hole nearby 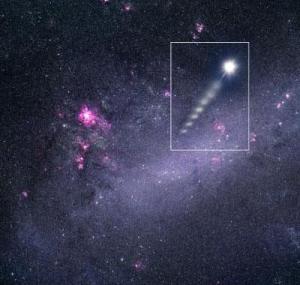 Astronomers have finally made sense of the mystery of a speeding star first discovered in 2005. The star, HE 0437-5439, is known as a hypervelocity star because, well, it’s fast.

It’s ripping through space at an estimated 1.6 million miles per hour.

Scientists know of only ten such stars speeding away from the Milky Way, but this one is unique because of both its elemental composition and its apparent age. Astronomers from the Carnegie Institution and Queen’s University in Belfast determined that the star originated in a nearby galaxy known as the Large Magellanic Cloud, and was probably spat out by a massive black hole.

This is exciting, the scientists say, because it’s the first evidence that there might be a massive black hole in that area. The next step will be finding it.