About half the size of a football field and 21 stories tall, the largest optical telescope ever constructed will use almost 1,000 mirrors to hunt for exoplanets--and maybe even unlock the secrets of spacetime. 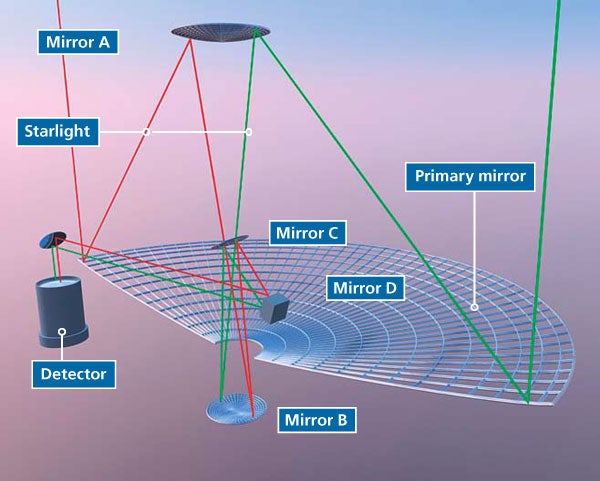 The PRIMARY MIRROR collects starlight and reflects it onto MIRROR A, which sends it through the hole in MIRROR C onto MIRROR B. The light then bounces onto the surface of MIRROR C, onto MIRROR D and into the DETECTOR.

**
How to Capture the Cosmos

1. Collect the Light
**
Starlight hits the 138-foot-wide parabolic **PRIMARY MIRROR-an array of 984 hexagonal panels, each one 330 pounds, 4.8 feet in diameter and two inches thick. The panels are so heavy that gravity actually causes them to shift very slightly as the scope moves, so three actuators under each panel flex 10 times per second to keep the mirror properly aligned. The light bounces up to the 20-foot-wide MIRROR A.

2. Reflect It
**
**MIRROR A reflects and inverts light through a hole in MIRROR C onto the 13.8-foot MIRROR B, which directs light up to the reflective surface of MIRROR C.

3. Sharpen It
**
**MIRROR C is a thin two-millimeter glass shell stretched over 5,000 actuators that push or pull to reshape the mirror’s surface 1,000 times per second. This rapid action performs so-called adaptive optics-realigning light distorted by the atmosphere into a sharp image. Astronomers calculate the correct setting for this mirror using bright reference stars [see “Calibrating a Giant Scope,” below].

4. Send It to a Sensor
**
Once corrected by the adaptive optics system, the light hits **MIRROR D, 8.9 feet in diameter, which moves up to 20 times per second to keep the reference star aligned against vibrations from wind hitting the structure. This mirror reflects the starlight to a DETECTOR, which houses a camera that captures images, and to instruments that astronomers use to measure such phenomena as the speed at which the universe is expanding.

Calibrating a Giant Scope
**
Atmospheric turbulence and airborne particles scatter starlight as it heads toward ground-based telescopes, so astronomers calibrate the European Extremely Large Telescope’s optics using bright reference stars in the same field of view as the target object. The rippled light wave hits each pixel on **MIRROR C at slightly different times. The adaptive optics system morphs the mirror’s surface so that the light hits each pixel at the same time, creating a clear image. But if an object has no nearby stars, astronomers make their own reference stars: Five or six lasers, known as a laser guide-star system, excite sodium ions 56 miles up in the atmosphere to create artificial beacons.

**How Do You Clean This Thing?
**
The E-ELT will collect nearly as much dust as it does starlight, but simply washing the mirror with water isn’t an option because the cracks between each panel could allow moisture into the electronics. Instead, telescope cleaners will spray ultrapure, cooled carbon dioxide “snow” over the primary mirror. The CO2 binds to the dust particles as it falls onto the mirror’s surface and, as it evaporates, takes most of the dust with it. With normal wear and tear, the mirrors will need a fresh coating of reflective material, most likely aluminum, every few years.