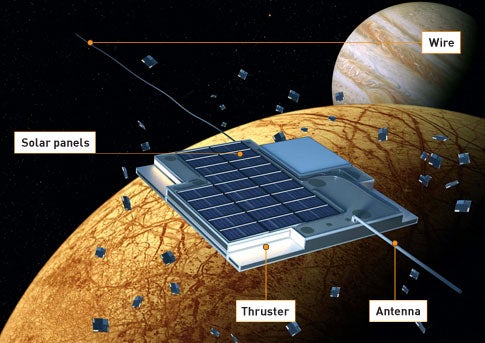 The next generation of robotic space explorers could be smaller than a dime–and cost about that much, too. Mason Peck, an engineer at Cornell University, envisions thousands of miniature spacecraft drifting to different planets, powered only by Earth’s magnetic field. Peck’s novel magnetic-propulsion method recently earned him a $75,000 grant from NASA’s Institute for Advanced Concepts to bring the idea closer to reality.

The system’s biggest advantage is that it could shave millions of dollars off the typical NASA satellite launch, because it requires almost no rocket fuel once in orbit. Instead the chips use the Lorentz force, a physics phenomenon that acts on electrically charged particles moving in a magnetic field. In this case, the force would help the chips escape Earth’s gravity and head for a distant planet. On arriving, the chips would rain down on the planet, analyze atmospheric or surface samples, and then signal to Earth if they found anything interesting-amino acids typical of cellular life, for example.

Peck and his team are currently testing Lorentz propulsion in the lab. If all goes well, the force could help launch full-size satellites, deliver bulk building materials to a moon base and, Peck’s personal favorite, send a space-chip mission to Jupiter’s moon Europa by 2030.

1. Thousands of chips are packed into the nose of a rocket and launched into low orbit. Each chip’s solar panel sends electrons to a capacitor, which pumps them through a long, trailing wire to electrically charge the chip.

2. The Lorentz force acts on the charged chip as it orbits [red] through Earth’s magnetic field [gray] to produce a force [green] that nudges the space chips to higher altitudes.

3. After about a year, the Lorentz force will have imparted enough energy to free the spacecraft from Earth’s gravity. Timed properly, Mason Peck says, the swarm will fly freely on a trajectory for Jupiter’s moon Europa.

4. After a two- to four-year journey, simple thrusters adjust the chips’ heading as they approach Europa. They are too small to burn up as they enter the atmosphere, and with several thousand en route, the mission will remain intact even if a few chips don’t make it.

5. Chips collect molecules from the air or the moon’s surface for analysis. Peck suggests a simple collection mechanism: Microparticles would stick to liquid on the chip’s surface, which would be sucked inside the chip.

6. Each chip sends a basic, one-bit signal if it finds signs of life. Thousands of chips reporting similar findings could motivate NASA to fund a more comprehensive-and expensive-mission.