April 13, 2029: A giant asteroid plunges to Earth. Learn what scientists are doing to detect-and deflect-the thousands of meteorites that could send us the way of the dinosaurs.

Launch the gallery to see the history of asteroid-earth collisions, past and future. And to bet on whether scientists will discover another large, potentially Earth-impacting asteroid soon, see our new PPX IPO.

A recent study showed that the U.S. and China are the nations most vulnerable to a devastating meteorite strike. With funding uncertain, astronomers are struggling to contain the threat of a civilization-ending galactic visitor.

What’s Out There
There are between one and two million near-Earth objects (NEOs)-chunks of space rock whose orbits may pass within 30 million miles of Earth-that pose a significant impact threat to the planet. Of the 4,535 NEOs detected and tracked (704 of which are real whoppers), none are on a definite collision course, but there could be millions more, many of them potentially lethal, lurking in the cosmos.

Detection
Who’s Watching? Most spotting is done by half a dozen optical telescopes in the U.S., Italy, Japan and Australia, coordinated by such programs as the Lincoln Near-Earth Asteroid Research (LINEAR) project, a NASA-funded collaboration between MIT’s Lincoln Laboratory and the U.S. Air Force tasked solely with the detection and cataloging of potential NEOs. Amateur astronomers worldwide also aid the effort. Collectively, the programs discover a new NEO every few days.

What’s the Plan? Since 1998, NASA has funded Spaceguard, a consortium of observatories working to find 90 percent of the half-mile-plus NEOs by 2008; the group has found three quarters of the predicted 1,100 NEOs in this size class. Spaceguard’s next step is to find 90 percent of NEOs measuring 460 feet or larger-potentially up to 12,000 objects-by 2020, but funding has not been secured. Larger wide-field scopes should come online in Hawaii, Arizona and Chile in the next decade, greatly speeding detection.

The Hot List NASA’s NEO office maintains a watch list of about 140 especially high-risk asteroids. The baddest asteroid so far is 820-foot-wide 99942 Apophis. Discovered in 2004, it briefly presented a 1-in-38 chance of collision on April 13, 2029. As more data helped scientists to pinpoint its orbit, Apophis has since been downgraded to 1 in 45,000 in 2036-still the biggest collision threat in the known universe.

Deflection
A handful of scientists, both at NASA and the privately funded B612 Foundation, have proposed various protocols for diverting or destroying a collision-course NEO. None currently have funding, although the asteroid fly-by mission Dawn will launch this month. And NASA has looked into using existing rocket and spacecraft technology to land an astronaut on an asteroid, a move that, if successful, could help hone future deflection strategies. Here, a few plans on how to save the planet.

Nuke It We already have the bombs, but the risk is that an explosion could turn one killer asteroid into many smaller killer asteroids, thrown into unpredictable trajectories-and radioactive.

Smack It A spacecraft would ram the object, altering its orbit or shattering it. Elegant, but could multiply the threats as with the bomb scenario above.

Lean On It A craft would push or pull the object. Not sideways-too energy-intensive-but backward or forward to slow it down or speed it up. A few pounds of force applied over several months would alter a medium-size body’s rate of travel such that it would miss hitting Earth by four or five minutes and thousands of miles. An asteroid tugboat would attach to a NEO and deliver a speed-altering nudge. A gravity tractor would hover close to a NEO and use mutual gravitational attraction to divert it ever so slightly. A solar sail would move a NEO with the subtle pressure of light from the sun.

Launch our gallery: “Hits and Misses, Past and Future” 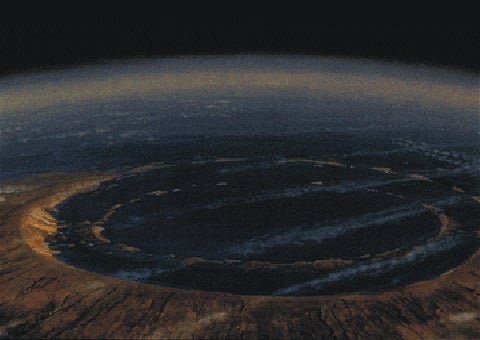 A nine-mile-wide meteorite strikes Mexico’s east coast, covering much of Earth with rocks, fire and toxic gases. The theory today is that dinosaurs and most other species were extinguished and that burrowing mammals–our ancestors–survived. The Chicxulub Crater remains to this day. 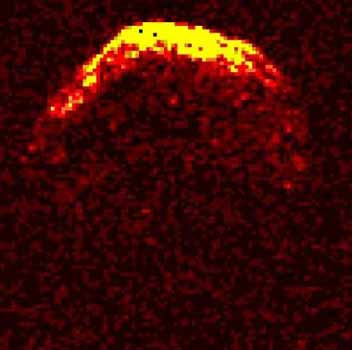 The half-mile-wide asteroid 1950 DA has a 1-in-300 chance of impact, the highest current probability for any known object. But a lot can change in 873 years. Stay tuned. A blurry image of the asteroid made with radar is one of our few pieces of knowledge about the NEO. 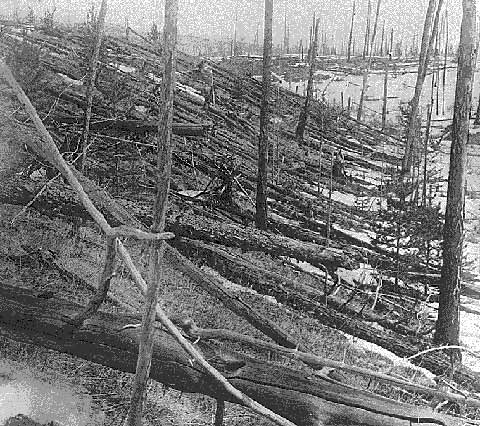 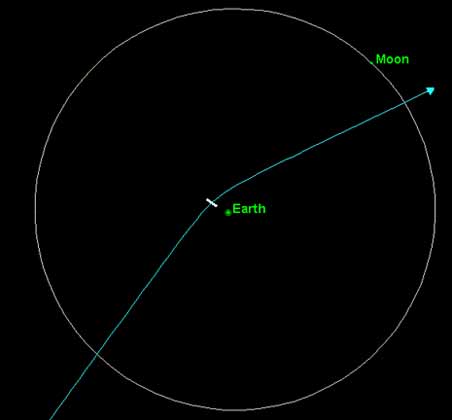 Asteroid 99942 Apophis will pass 21,557 miles from Earth–5,000 miles closer than most weather satellites. It will be visible to the naked eye. At that time, Earth’s gravity may perturb the 820-foot asteroid’s motion and magnify its chance of returning to hit us on April 13, 2036. 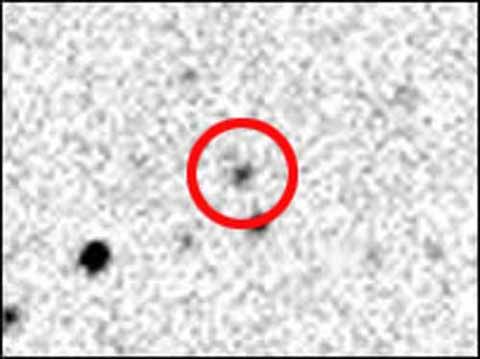 The first sighting, by LINEAR, of asteroid 2004 AS1 suggests that it will hit the Northern Hemisphere in a few days. Astronomers are at a loss as to who to call: the U.N.? The president? NASA? Six nervous hours pass until an amateur in Colorado sends data to LINEAR showing that the asteroid is not about to collide. 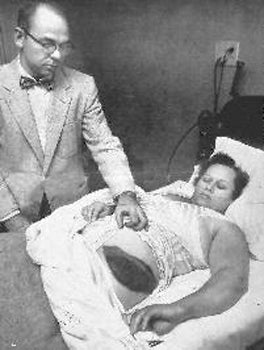 An 8.5-pound meteorite punches through the roof of a house in Sylacauga, Alabama, bounces off a radio, and hits Ann Elizabeth Hodges as she lies napping on the couch–the only known meteorite to strike a person. She suffers a nasty bruise on her hip.