In the latest bid to rocket tourists into orbit, the secretive Blue Origin unveils a flying pod. Is your space voyage sooner than you think? 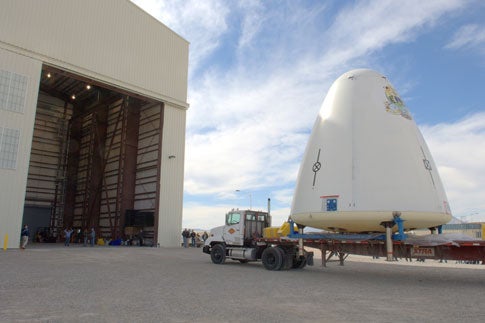 A mere three years after Burt Rutan´s SpaceShipOne skimmed the edge of space to capture the $10-million Ansari X Prize, more than half a dozen companies are furiously building and testing spacecraft designed to take paying passengers on suborbital journeys and beyond. Five states, including California, Oklahoma, Florida, Virginia and Alaska, now hold government licenses for commercial spaceports-and the Federal Aviation Administration is already working to create new protocols so air-traffic controllers will know how to route old-fashioned commercial flights clear of busy spaceport traffic. â€The giggle factor is gone,â€ says Taber MacCallum, CEO of Tucson,
Arizona-based Paragon Space Development Corp., one of a number of firms angling to supply future spaceliners with everything from spacesuits to rocket parts.

In January, Amazon.com founder Jeff Bezos grabbed headlines when he revealed that his secretive seven-year-old rocket-science side venture, Blue Origin, had successfully tested a vehicle dubbed Goddard. The craft, which launches and lands vertically, is a significant step toward the billionaire´s plans for flying sightseers to low Earth orbit and beyond.

A video posted on the company´s Web site reveals a gumdrop-shaped capsule whooshing 285 feet above the West Texas scrub and, cushioned by the thrust of nine rocket nozzles, gently descending onto stubby legs. Bezos wouldn´t comment publicly, but a recent 223-page Federal Aviation Administration filing by his rocket scientists reveals more clues: This year, engineers will attempt to push Goddard, which uses concentrated hydrogen peroxide as a propellant, to an altitude of 2,000 feet.

By 2010, Blue Origin hopes to launch weekly suborbital passenger flights in a ship called New Shepard (as in Alan Shepard, the first American in space). The 50-foot-tall vehicle will ferry at least three passengers to 62 miles for a few moments of zero gravity at the edge of space, and land using retrorockets and a parachute.

Meanwhile Richard Branson´s company Virgin Galactic aims to beat Blue Origin to the launchpad and will test a craft dubbed the VSS Enterprise (yes, Spock, that one) next year, with commercial flights as soon as 2009. Designed by Rutan and modeled on SpaceShipOne, the 60-foot-long spaceliner will carry six passengers and two pilots.

Another favored contender in the suborbital space race is Rocketplane Kistler in Oklahoma City. Its craft, the Rocketplane XP, is based on a heavily modified Learjet 25 fuselage, with rocket engines delivering 36,000 pounds of thrust. The 44-foot-long vehicle is designed for three passengers and one pilot. Test flights could get under way as early as next year, with commercial flights in 2009, says Bob Seto, the company´s vice president.

None of these rides will come cheap. Virgin Galactic is asking $200,000 a ticket, and although Blue Origin has yet to set a fare, you can bet it will cost more than Amazon´s two-day shipping upgrade. But even if stratospheric ticket prices don´t seem to be deterring eager space tourists-200 people have already booked flights with Virgin Galactic-most companies are well aware that a deadly crash could hurt the flow of wealthy passengers. So with that in mind, the industry is proceeding in the spirit of Blue Origin´s lofty Latin corporate motto, Gradatim ferociter. Roughly: â€Step by step, ferociously.â€