Spin Me Up, Scotty

Forget rockets. All you need to launch a satellite is a sled and a giant magnetic slingshot 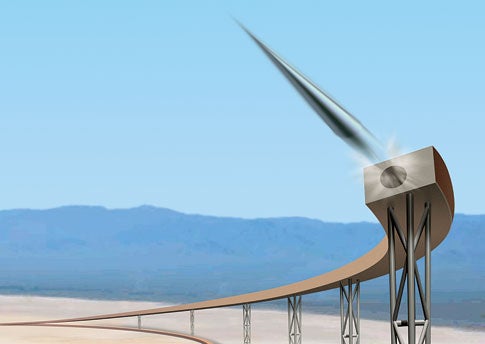 by Tony Randazzo for AA Reps

Astronauts are trained to withstand as much as nine times the force of gravity. (Three Gs, by comparison, could make the average guy pass out.) But even the toughest among them fall out of the running when it comes to a launch concept from a small civilian company in Goleta, California. To survive the ride on Launchpoint Technologies´s invention, the payload has to be able to survive a brain-splattering 10,000 Gs.

The design calls for a high-speed accelerator that whips a projectile as heavy as 220 pounds around a circular 1.5-mile-radius vacuum tunnel. Powerful electromagnetic motors inside the tunnel will accelerate the unit, strapped to a magnetic sled, in circles until it reaches a velocity of six miles per second and then will eject the projectile from a launch ramp into space.

The system is still just an idea on paper, but the U.S. Air Force has awarded Launchpoint a two-year, $500,000 grant to prove it can work. Project leader Jim Fiske, an expert in magnetic levitation, believes that the magnetic forces would counteract the pulverizing G-forces generated by radial acceleration and prevent the sled from touching the tunnel wall.

As for the system´s cost, its low power requirements would allow spy micro-satellites to be slung into orbit for $50,000, a small fraction of the current $5-million launch cost. That explains the Air Force´s interest, but the system could also be a boon for space exploration. An inexpensive magnet-propelled pipeline could toss construction materials, food and other basic resources into orbit to supply tomorrow´s space colonies. â€You could send a block of aluminum, water or even frozen mashed potatoes,â€ Fiske suggests-anything durable enough to handle the stress.

Fiske says a demonstration device could be ready in four years and will probably be located on a dry lake bed at the Department of Energy´s Nevada Test Site. But future launch rings, he adds, could sit near mountain ranges or even float on the ocean.