An aeronautical engineer presents a new twist on the olâ€™ flying car: the road-ready airplane 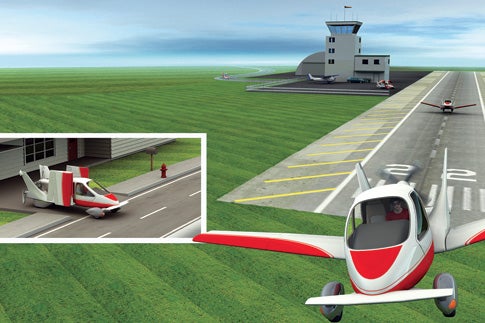 Even though you’ll park it IN your garage, drive it to your nearest airstrip, and pilot it to your destination, don’t think of the Transition as a flying car. Carl Dietrich, the MIT aeronautical-engineering graduate student who is designing the vehicle, prefers the term “roadable aircraft”–meaning a plane that drives, not a car that flies. “We try to steer away from The Jetsons,” Dietrich says. “It’s a step in that direction, but a baby step.”

Still, in an age of hub-centric commercial flights, Dietrich thinks the ability to cruise between two of the 4,800 small airports nationwide and then drive to a final destination, whether your office or vacation home, will be irresistible to amateur pilots. He and his team are finishing a one-fifth-scale model for wind-tunnel tests. They hope to build a prototype within two years and to have the first Transitions rolling down runways by 2010. The projected price tag? About $150,000, roughly the price of a fully loaded Ford GT sports car.