The aging Marine One helicopter fleet is finally due to retire. Meet its successor 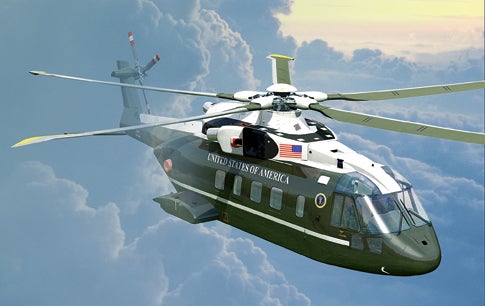 After decades of upgrades to a fleet of notoriously cramped Sikorsky VH-3 Sea Kings, the White House has tasked Lockheed Martin with a dramatic, $6.1-billion makeover of Marine One, the presidential helicopter, starting this summer. The goal: to fit a mobile Oval Office into the tight quarters of a chopper. The new fleet will consist of 23 VH-71 aircraft, each of which will have 200 square feet of cabin space, nearly double the Sea King´s 116.

Aside from the legroom, the copter will incorporate major upgrades to the old defense and communications
systems. Equally important is that the aircraft is flight-proven-the $110-million bird is derived from a European-built AgustaWestland EH101, currently doing military service for Canada and the U.K. Here, an inside look at the revamped Marine One, set to gradually go into service between 2009 and 2014.

Fuselage: Made of high-strength reinforced aluminum alloy, it can withstand crash impacts in excess of 15 Gs.

Engine: The VH-71 can shift from three 3,000-horsepower turboshaft engines to two, whereas the twin-engine Sea King must land if one engine fails.

Rotor: Five flared rotor blades increase the craft´s efficiency by up to 30 percent over conventional designs when flying at 150-knot cruising speed.

Defense System: The VH-71s, like the EH101s they are modeled on, will probably feature radar-warning receiv-ers, laser detectors and flare dispensers to deflect anti-aircraft missiles.

Cabin: Measuring eight feet wide and 25 feet long, the cabin will include a lavatory and a galley kitchen. The fold-down stair spares the president from ducking during photogenic entrances and exits.

Communications More room for communications hardware means the president will have secure and continuous access to all White House and Pentagon computer systems and data streams.