NASA unveils plans for their new "Apollo on steroids" capsule, bound for the moon. 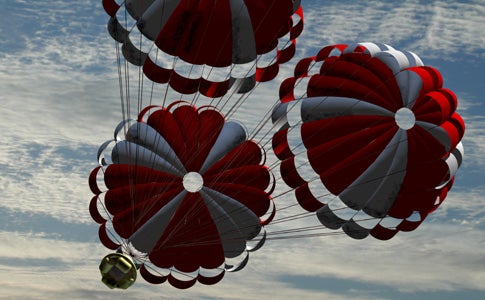 Apollo capsules splashed down in the ocean, but CEV will be able to land on dry ground.

When NASA administrator Michael Griffin unveiled the agency’s plans for the Crew Exploration Vehicle (CEV), he described it as “Apollo on steroids.” The resemblance is easy to see–each is a blunt-nosed, cone-shaped capsule that’s strapped to a rocket and sent to the moon, where it deploys a lunar lander and then returns to Earth for a parachute landing. There are important differences, however:

1) Size. The four-person CEV will be 18 feet in diameter, compared with 12.8 feet for the cramped three-person Apollo capsule. Yet CEV will be only 10 to 15 percent heavier, because it will be made from newer materials such as carbon composites and aluminum alloys.

2) Launch. Apollo was launched by the massive Saturn V, the biggest rocket ever built; the CEV capsule will be launched by a smaller rocket. That´s because the CEV will not go directly to the moon. Instead the crew will meet up with heavier pieces of their moon-going spaceship-launched by a separate rocket-in Earth orbit.

3) Range. CEV will carry more fuel than Apollo, so astronauts will be able to go anywhere on the face of the moon. Apollo had only enough fuel to land on the lunar equator.

4) Controls. CEV’s computers will be much more powerful than Apollo’s, enabling all four astronauts to descend to the moon’s surface while their spaceship orbits in autopilot mode.

5) Landing. When CEV returns to Earth, it will most likely land on dry ground. Apollo capsules landed in the ocean, which exposed them to corrosive saltwater and required expensive recovery efforts involving boats and aircraft.