With test targets in sight, European scientists ramp up for the first-ever asteroid-deflection mission 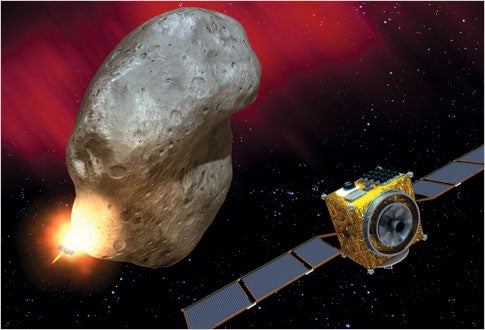 Despite its playful name, taken from Miguel de Cervantes´s classic novel, the European Space Agency´s Don Quijote mission is deadly serious. Slated for 2012, the $180-million mission will attempt to move one of two target asteroids, just identified this fall, by rear-ending it with a speeding spacecraft. Quijote is the first venture of its kind, although the B612 Foundation, a privately-funded nonprofit based in Tiburon, California, intends to launch a similar effort by 2015.

The likelihood of an asteroid strike is low compared with that of other natural disasters; the most threatening rocks so far discovered have a 0.02 percent chance of smashing into Earth. But the effects would be devastating. A 1,500-foot-wide asteroid could wipe New York City off the map.

Although neither of Quijote´s targets is headed for Earth, the test run will teach scientists how to deal with a real threat. Here, a glimpse of ESA´s plan for dodging doomsday.

The first probe, named Sancho Panza after Don Quijote´s faithful squire, will probably launch from a spaceport in Russia and arrive at the asteroid after
a three-year journey. (The launch will be timed so that Sancho´s orbit intersects with that of its target.) Sancho will then orbit several thousand feet from the asteroid´s surface, gathering data with its infrared imager and camera. Scientists will use this information to chart Hidalgo´s journey.

Once scientists determine that Sancho is operating smoothly, they will launch Hidalgo, a bare-bones copy of the probe, on a 530-day trip to the rock.

With Sancho watching from a safe distance, Hidalgo will smash into the 1,000- to 1,400-foot-wide asteroid at about six miles per second. The impact could kick up dust and break off chunks of rock from the surface. But the real goal is to see whether-and to what degree-a craft as small as Hidalgo can speed up a much larger space rock. If it can, preventing an asteroid from colliding with Earth could be as simple as giving it a good kick from behind.

Quijote mission director Andras Glvez says that the force of Hidalgo´s impact could change the asteroid´s velocity by up to 0.2 millimeter per second (the researchers will measure the shift by tracking Sancho´s speed). That may seem small, but Galvez says that if the asteroid were headed for Earth, that incremental boost could be enough to prevent a collision. The accelerated asteroid would pass through the projected impact point while Earth was still on its way. The hard part: This tiny boost must occur years in advance to make a difference.