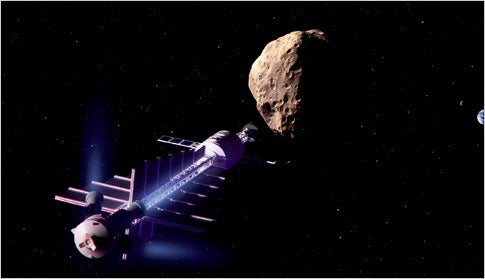 The conceptual “tractor” is a 65-foot-long spacecraft that hovers above an asteroid, using its gravitational force to tug the rock out of harm’s way.

An asteroid as big as a stadium is heading toward Earth. The impact could obliterate an area the size of Delaware. What to do? The stock answer usually involves nuclear missiles, robotic impactors or some other aggressive technique. But such methods may well fall short. Even after the asteroid was blown up, large chunks could still strike Earth.

Now NASA astronauts Edward Lu and Stanley Love have come up with a much gentler solution. They argue that the killer asteroid could be eased off its collision course simply by applying gravity.

Their plan calls for an unmanned spacecraft called a “gravitational tractor” to hover near the asteroid for a period of months or years. The small gravitational force exerted on the asteroid by the vehicle-perhaps as little as a quarter of a pound-would be enough to nudge the rock into a slightly different orbit, averting a crack-up. “You just want to hang there and let the spacecraft gradually adjust the asteroid´s course,” Love says.

For example, to deflect a 700-foot asteroid, the astronauts envision a 20-ton nuclear-powered spacecraft shaped like a pendulum, with the heaviest part closest to the asteroid. This arrangement will produce the greatest gravitational force and will also help keep the ship stable as it hovers next to the asteroid.p>
But the first real-world test might involve a much bigger asteroid known as 99942 Apophis, which is between 1,000 and 1,300 feet long and weighs perhaps 50 million tons. There is a very small chance-from 1 in 5,000 to 1 in 10,000-that this massive rock will hit Earth in 2036. Love and Lu say that if a gravitational tractor were sent up before 2029, when the asteroid will make a close pass to Earth, the job would be relatively easy, requiring just a one-ton spacecraft to make the necessary small adjustment in Apophis´s trajectory. “It´s like changing the angle of a bank shot in pool,” Love says. “A little change early on has a large effect down the line.”