Russia partners with Europe to build its own reusable spacecraft for flights to the International Space Station and beyond. 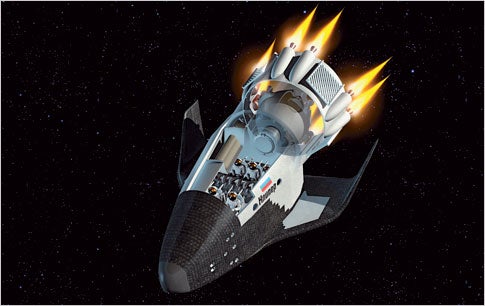 With NASA’s beleaguered shuttle still grounded over safety concerns–and given the unanswered questions about its replacement, the Crew Exploration Vehicle, which won’t be ready to fly until 2012–the European Space Agency is mulling an option to buy its own ride to space. This month ESA plans to request $60 million from its member states to help Russia prepare its new, reusable spaceship, the Clipper, for a crewless test flight by 2011 and a manned flight by 2012.

The six-person Clipper is designed to replace Russia’s three-person Soyuz capsule, which has been in operation since the 1960s and is currently the only reliable transport to the International Space Station. Lighter than NASA’s shuttle and more powerful than the Soyuz, the Clipper will be more than just a taxi to the ISS. Notes ESA official Manuel Valls, “It could go to the moon.”

The Russian Federal Space Agency showed off a full-scale mock-up of the craft at the Moscow International Air Show in August. If all goes well-that is, if ESA ponies up funding-design studies of the Clipper could begin in early 2006.

The 13-ton Clipper is nearly twice the weight of the Soyuz capsule and thus requires a stronger launcher. Russian engineers are considering
several options, including the Ukrainian-built Zenit and a yet-to-be-developed Russian rocket called the Onega, which is essentially a beefed-up version of the Soyuz launcher.

The 21-foot-long passenger cabin and reentry vehicle will accommodate six crew members (two pilots and four other astronauts or tourists), plus 1,100 pounds of cargo-more than 10 times that of the Soyuz.

The 13-foot-long detachable habitation module contains life-support systems, including a toilet, as well as the docking port for the International Space Station.

The instrument module houses thrusters to separate the Clipper from its launcherand to maneuver the spacecraft. It also contains the electrical system, which is powered by extendable solar arrays. Both the instrument module and the habitation module are jettisoned before reentry.

The craft’s stubby wings enable the pilot to steer during the descent and make a controlled landing on an airport runway. In case of an emergency, parachutes ensure that the Clipper can land safely on the plains of central Russia.