Will Tourists Beat the Government Back to the Moon?

For $100 million, a U.S. company promises you the vacation of a lifetime: a week in lunar orbit 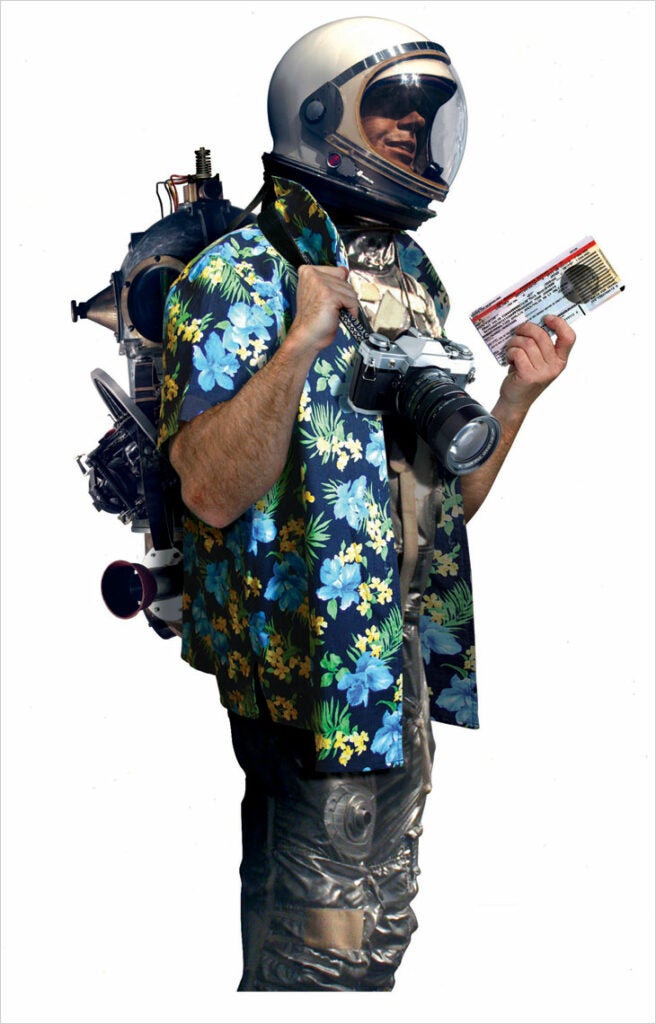 Tourists on board the moon-bound Soyuz will dine on vacuum-sealed food and share the craft’s compact zero-gravity toilet.

On July 20, 1969, astronauts Neil Armstrong and “Buzz” Aldrin stepped onto the Sea of Tranquility, becoming the first humans to grace the moon. Shortly thereafter, the Soviets, plagued by system failures of their Soyuz 7K-L1 spacecraft, abandoned all hope of doing the same.

Now the Russians may get to the moon after all, at least if the Arlington, Virginia, firm Space Adventures has its way-and you can tag along (if you start routinely winning the lottery). The company, which has sent two wealthy businessmen, Dennis Tito and Mark Shuttleworth, to the International Space Station atop Russian rockets, has announced a joint venture with the Russian Federal Space Agency (FSA) to embark one cosmonaut and two billionaires on a trip around the moon in an upgraded Soyuz craft by 2010. The ticket price: $100 million per person.

The 8- to 15-day mission, which would mark the first time humans have ventured beyond Earth’s orbit since the last Apollo mission in 1972, might include a stop at the ISS after launching from Kazakhstan. Then the crew would rendezvous with a rocket already waiting in orbit to blast toward the moon. Traveling at more than 24,000 miles an hour, the Soyuz would use the moon’s gravity to slingshot around to the farside and then return home. If the flight is a success, the company will launch increasingly more ambitious missions, says Space Adventures president and CEO Eric Anderson. “Eventually we’ll land on the moon,” he predicts.

He says that modifying the Soyuz will be far less expensive than building a new craft. Space Adventures plans to work with the FSA to improve the guidance and communications systems. To make sure their passengers get their nine figures’ worth when they pass within 62 miles of the moon’s surface (for about 30 minutes), Anderson says, “we’re going to
put in a bigger window.”

Yet the most important upgrade, FSA deputy head Nikolai Moiseyev told the RIA Novosti wire service, will be reinforced heat shields that allow the craft to roar into Earth’s atmosphere not once but twice upon returning-first to slow down using the drag from atmospheric gases and a second time (after ascending to cool off) to touch down back in Kazakhstan. In contrast, the life-support system will require less work, Anderson says, because cosmonauts have already spent as long as two weeks in low-Earth orbit in a Soyuz.

So which of the world’s 2,000 or so sufficiently affluent people (by Anderson’s reckoning) might book a ticket? “We’re talking to a few key individuals,” he says, but the only name he’ll drop is Gregory Olsen, the scientist who has plunked down $20 million to become Space Adventures’s third visitor to the ISS in October.

Money aside, you must also possess impeccable health, because a medical crisis midflight could prompt an emergency return to Earth. The Federal Aviation Administration’s Civil Aerospace Medical Institute has issued health guidelines for the U.S. space-tourism industry but has no power to enforce them. (Even if it did, the FAA has no jurisdiction over this mission, since it occurs in foreign territory.)

Perhaps more vital is psychological fitness. The trip will require three people to share a space that Anderson equates to a large SUV. NASA astronaut Michael Foale, who has traveled in a Soyuz to the ISS, calls it “cramped” but notes that the passengers won’t be stuck in their seats. “You can turn around, go upside down,” he says.

The biggest challenge, according to Foale, is adjusting to “the complete dependence you have on your other crewmates being helpful and considerate.” Which makes one wonder how billionaires will fare flying 500,000 miles in coach.