Q: How do scientists name rocks on Mars?

We answer the questions that keep you up at night 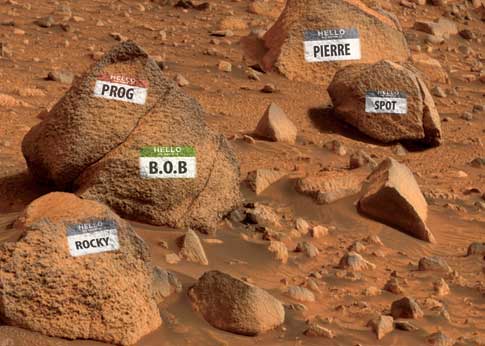 Scientists working with the Mars rovers are resorting to some unusual nomenclature to handle all the martian features they’ve found.

The twin Mars rovers, Spirit and Opportunity, have observed more than 4,000 geographical features on the planet since they landed in January 2004. Expected to run for only three months, the rovers are still going strong, and their mission has now been extended to at least September of next year. They’ve been ranging for so long, in fact, that they’re causing a problem for their handlers. In order to document the terrain efficiently, scientists have had to come up with unique names for all the features the rovers discover, a task that gets tougher with each passing day. Currently, the list of names includes dates in history, pop songs, cartoon characters, ice cream flavors and, ironically for a planet with no open bodies of water, types of sushi.

It started out innocently enough, with the scientists relying on precedent to guide their nomenclature choices. The crater that hosted Opportunity‘s landing was christened Eagle in honor of Neil Armstrong and Buzz Aldrin’s lunar module. The Columbia Hills stand in mem-
ory of the space shuttle that broke apart in 2003-each of the seven hills is named for a Columbia crew member.

Lately, however, Mars researchers have grown more desperate, basing names on simple physical attributes or, well, nothing of any scientific relevance at all. The mishmash of monikers includes Engelbert Humperdinck and Be My Valentine (both boulders). A particularly pockmarked meteorite is now known as SpongeBob SquarePants. And one section of the planet sounds as if it’s fresh from a Baskin-Robbins freezer: an area of round pebbles is named Cookies ‘n’ Cream, while a lighter patch of soil is Vanilla. Other formations are called Mudpie, Coconut and Chocolate Chip.

Most of the names will never be more than unofficial reference tags. The International Astronomical Union established guidelines for labeling the martian landscape in the 1960s. Craters less than 37 miles in diameter, for example, are named after cities on Earth with populations of less than 100,000; those with larger diameters bear the names of deceased planetary scientists. Small items such as rocks fall under the umbrella of â€Other features,â€ requiring a name that evokes the nearest object to the rock that has been identified using Earth-based telescopes.

But such institutional niceties are almost useless when you’re piloting a rover across miles of the martian surface and you mark your progress in meters per day. On rock-strewn Mars, navigating by 50,000 different hunks of mineral named after, say, Olympus Mons, makes a hike through a jungle with a treasure map seem like a cakewalk.