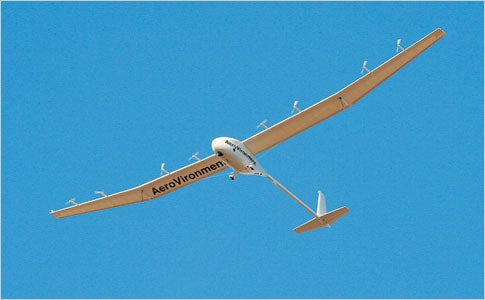 Imagine an unmanned aerial vehicle (UAV) that could fly for days rather than hours, aiding soldiers on reconnaissance missions or supplying emergency communications to disaster-affected regions. AeroVironment, which built the first human- and solar-powered airplanes, has successfully flown a prototype of a UAV that will be able to remain at high altitudes for longer than a week at a time. Unlike earlier solar-powered systems, which had to power the vehicle and store enough electricity for nighttime flying, Global Observer uses fuel-cell-powered electric motors to drive eight propellers. A 50-foot-wingspan prototype flew several hour-long missions beginning in May, proving that the vehicle can run on hydrogen alone.