The XSS-11, an Air Force satellite that can automatically track and orbit around other objects in space, downloads its first pictures to the public. 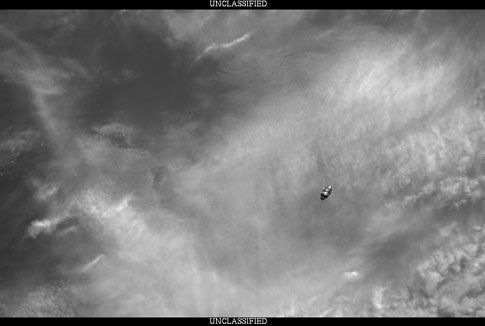 This is the first photograph taken by a microsatellite of another object in space that has ever been released to the general public. The object near the center is the upper stage of a Minotaur I rocket that was used to launch the Experimental Satellite System-11, commonly known as XSS-11. The photograph was taken by the digital “witness camera” aboard XSS-11, a dishwasher-size microsatellite developed by the Air Force Research Laboratory.

XSS-11 was launched in April and has since conducted numerous “proximity operations”-approaching and maneuvering around the spent Minotaur rocket stage at distances as close as 500 meters (the distance at which this photo was taken, about a third of a mile). Over the next year, the spacecraft will rendezvous with several other U.S.-owned dead or inactive objects in space.

The purpose of the XSS-11 program is to demonstrate the capability of microsatellites to approach and observe objects in space. Someday microsatellites could be used to repair and resupply larger satellites, which currently must be abandoned if they malfunction or run out of fuel.

Unlike earlier spacecraft, XSS-11 does not rely on navigation aids mounted on the objects it approaches. Instead it uses an onboard laser range finder to measure the distance to its targets.

As the project continues, XSS-11 will demonstrate that it can perform some maneuvers autonomously. Autonomous operations would lower the cost of missions by reducing the number of personnel needed on the ground. Because the XSS-11 mission has so far been successful, staffing for the project has already been reduced from 30 to 15.

I filed a Freedom of Information Act request for photographs taken by the microsatellite in September 2005, with the hope of running them in Popular Science‘s November cover story “Battlefield Space”. However, I was told that they were classified. Soon after the magazine hit newsstands, this photo was declassified and released.