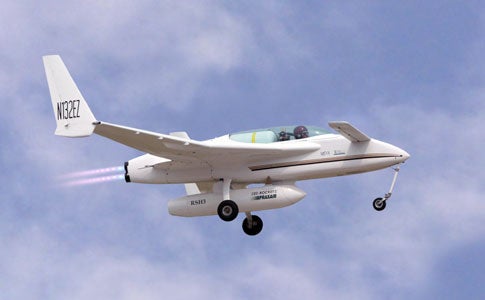 Airplanes flown in the Rocket Racing League, due to launch next fall, will be based on the XCOR EZ-Rocket, a modified Long-EZ homebuilt airplane that has served as a test bed for new rocket technologies.

Watch out, Nascar-the Rocket Racing League is about to start stealing some of your famed thunder. Picture high-tech, rocket-propelled airplanes racing around three-dimensional racetracks-in-the-sky with ear-shattering ferocity. Twenty-foot-long orange plumes will trail the aerobatic X-Racers as the daredevil pilots gun the rockets for critical boosts on long straits and steep vertical climbs. They´ll drop into the pits to fuel up on liquid oxygen and kerosene before reentering the fray.

That´s the vision of Ansari X Prize founder Peter Diamandis and former Indy Racing League team owner Granger Whitelaw, who are hoping to corral enough teams, money and enthusiasm to next year launch a first-ever series of competitive air races featuring rocket-propelled aircraft. â€We want to bring these vehicles to the public and bring 21st-century racing into their living rooms,â€ Diamandis said on October 3 at a press conference at the Yale Club in New York City.

The league will capitalize on the current momentum toward commercial spaceflight-much of it generated by Diamandis´s recent X Prize competition for repeated, private suborbital rocket launches, won last year by Burt Rutan´s SpaceShipOne. The idea, Diamandis said, is that the RRL will be both entertainment spectacle and a way to develop rocket technology for future spaceflight. The airplanes will initially be based on the XCOR Aerospace EZ-Rocket, a modified Long-EZ (a homebuilt aerobatic airplane designed by Burt Rutan) that has been used as a testing platform for the XCOR corporation´s rocket technology. XCOR will upgrade the engines to 1,500- to 1,800-pound liquid-oxygen and kerosene motors that generate twice the thrust of the current 400-pound liquid-oxygen- and alcohol-fueled motors, two of which power the EZ-Rocket. Racing teams will be allowed to modify their vehicles and introduce new technology to enhance performance-hence the development potential for future space-tourist flights.

Although the X-Racers will carry enough fuel for only four minutes of powered flight, the engines could be shut off and reignited repeatedly during races, allowing the pilots to time their boosts to critical moments and then coast down from their top speeds until the boost was needed again. Those projected top speeds weren´t provided at the press conference, but, based on the EZ-Rocket´s performance, they will probably be in the 250mph range. That doesn´t sound particularly fast, but for a small aircraft on a closed course, it will certainly challenge the pilots.

The league expects to execute two demonstrations in 2006: a set of preliminary flights at the Reno Air Races in Nevada in September and a full race at the X Prize Cup symposium in New Mexico in October. The first full season of races, featuring 10 teams and an undisclosed number of races, will begin in 2007. The effort is being financed by private investors and the team leaders, including Whitelaw, who, as president of the league, is also leveraging his Indy â€car-racing and management experience to help create the series.

The key question is whether the league can succeed commercially (the 41-year-old Reno Air Races have had a difficult time attracting large mainstream sponsors). But Diamandis and Whitelaw argue that the RRL series will be much more accessible to public fans than the once-yearly Reno event, and the high-tech element will draw spectators. New broadcast techniques will display live track and vehicle information for home viewers, and spectators will be able to supplement their experience with handheld PDAs that will receive in-cockpit and wing-mounted camera feeds from their favorite racers. Additionally, fans will be able to â€participateâ€ in races via videogame links that will allow them to compete in real-time against the actual racers. All this, the pair hope, will draw large corporate sponsors and keep the teams flying.