This month Europe sends the first spacecraft to Venus in 16 years. The reward upon arrival: searing heat, hurricane-force winds and not a drop of water 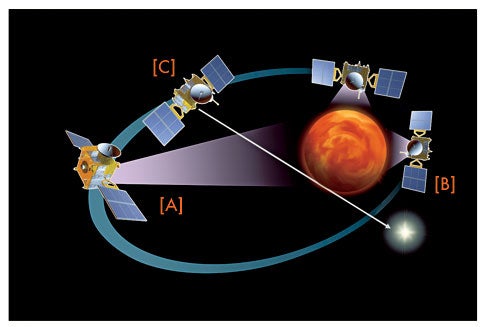 On October 26, a Soyuz rocket will blast off from the Baikonur Cosmo-
drome in Kazakhstan, catapulting a VW Bugâ€size spacecraft toward Venus. If all goes as planned, Venus Express, which was built by the European Space Agency, will pull into orbit around the cloud-covered planet on April 4, 2006, becoming its first visitor since 1990. The reward upon arrival: searing heat,
hurricane-force winds and little, if any, water.

But planetary scientist Sean Solomon of the Carnegie Institution of Washington
is confident that Venus is worth the trip. For one thing, the planet has mysteries aplenty, the biggest being its odd relationship to Earth. “Venus and Earth are sister planets,” Solomon explains, “so similar in mass and volume and distance from the sun that it’s a real puzzle why they turned out so differently.” One striking distinction: While Earth is kind to life, Venus, with its hot, barren surface, is hostile.
The $260-million Venus Express will deploy seven cloud-piercing instruments to make the first comprehensive profile of the planet. The craft will study how the muggy atmosphere circulates at hurricane speeds and make the most detailed study yet of Venus’s runaway greenhouse effect, the process that makes the
planet’s surface the hottest in the solar system.

Here, a sneak preview of a trip you’ll never want to make yourself.

Although NASA plans to send humans to Mars in the next 20 years, Venus is no place for space walks. An astronaut descending through the cloud tops would be buffeted by 230mph winds choked with
deadly levels of carbon dioxide. As he touched down on the
surface, the pressure of the thick atmosphere would be a crushing
90 times Earth’s surface pressure-like being 3,000 feet under the sea. And then there’s the 890