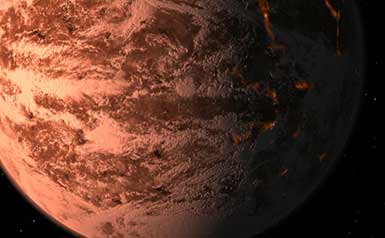 This spring, a telescope designed to peer into our neighboring solar systems and detect unseen planets will see first light. Built atop Mount Hamilton near San Jose, California, the Lick Observatory´s Rocky Planet Finder will be one of the biggest automated telescope on Earth-its eight-foot-diameter main mirror is the same size as Hubble´s-and the only one dedicated solely to the search for Earth-like planets. â€The goal,â€ explains renowned planet hunter Steve Vogt, who designed the scope´s optics, â€is to find a real Earth around a nearby star in an orbit where water and life could exist.â€

Currently the world´s premiere planet-hunting machine is the Keck I telescope at Mauna Kea in Hawaii. But telescope nights on the Keck are such a valued currency to astronomers that planet hunters get 20 to 30 nights a year at most. With 1,330 nearby stars to search, it´s hardly enough. For example, it took 155 Keck observations of one star for Vogt and his colleagues to find the most terrestrial-like planet, a hot rocky orb 7.5 times the mass of Earth with a surface temperature of up to 700F (alas, not quite the new Earth Vogt is seeking).
The Rocky Planet Finder will operate every clear night-in San Jose, pretty much every night between May and October, and plenty more during the rest of the year. Fully automated, it will scan the skies for planets of just a few Earth-masses at 5 to 10 times the speed of most astronomical telescopes. The primary planet-hunting tool on the RPF is a high-resolution spectrometer, a phone-booth-size instrument for measuring stellar wobble. Like other telescopes, the RPF cannot see planets directly, but it can detect their effects on parent stars. As a planet makes its orbit, it exerts a gravitational tug on its sun, causing it to wobble in its orbit-this wobbling causes red- and blue-shifts in the emitted starlight. The RPF´s attached spectrometer separates collected starlight into its component wavelengths. Elements like hydrogen and iron found in the star will absorb specific, known wavelengths (called atomic absorption lines). Stellar wobbling, caused by the presence of a rocky planet, causes shifts in the position of these atomic absorption lines: Redshifting causes the absorption lines to move to longer wavelengths than they would normally be; blue-shifting moves the absorption lines to shorter wavelengths.

So when will planet hunters find a new Earth? Vogt´s betting not on decades but years.