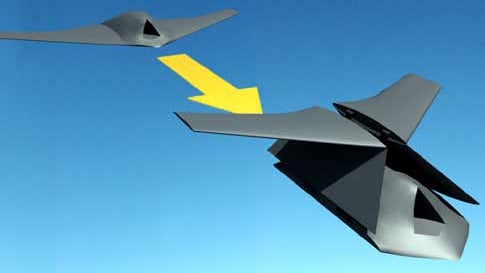 by Kris Holland, Based On Illustration Courtesy Lockheed Martin

Flying an F-16 fighter jet on a long reconnaissance mission is about as efficient as driving a Formula One racecar to the grocery store. Its swept wings have great maneuverability at high speeds, but to stay aloft for hours at a time, you’d be better off with a slower, straight-wing craft such as the U.S. Air Force’s unmanned reconnaissance vehicle Global Hawk. But what if you need to monitor vast tracts of land and respond at a moment’s notice to enemy activity? Your best bet would be a birdlike airplane wing that radically alters size, shape and position on command. Trouble is, your best bet doesn’t exist. Yet.

Lockheed Martin’s Skunk Works and NextGen Aeronautics–both of which won contracts last year from the Defense Advanced Research Projects Agency (DARPA)–in conjunction with the Air Force Research Laboratory, are engineering wings that can change their total surface area by
up to 150 percent with the flip of a switch. Half-scale models of the contractors’ wings will be tested in NASA Langley Research Center’s Transonic Dynamics wind tunnel later this fall. If either proves aerodynamically effective, DARPA will commission a half-scale unmanned prototype of the entire plane, which would have a wingspan of 20 to 30 feet.

Although mechanically “morphing” wings date back to the Wright brothers and can currently be found on planes including the B1-B bomber, most are rigid structures limited to sweeping back and forth on a simple pivot. With new shape-shifting polymers that expand and contract when electricity is applied, engineers can craft extremely flexible skins that stretch along with bendable actuators embedded in the wing.

DARPA spokeswoman Jan Walker cautions that no long-term plans for the technology have yet been made. “We will make that decision in the future once we have the results of the current phase,” she says. Nevertheless, the government’s $19 million investment suggests military confidence where it matters most.

One Way To Morph A Wing
Lockheed Martin’s Skunk Works is using heat-sensitive polymers instead of aluminum to make a wing’s skin instantly flexible or rigid.

Actuators embedded in the wing serve as joints and bend the wing to optimize its shape for a given flight pattern. The actuators are helical strips of thermal polymer that expand when heated, generating torque.

The wings fold in toward the fuselage along multiple joints, transforming a reconnaissance plane (wings straight) into a fighter (wings folded) during flight. The overall change in span is more than 50 percent.