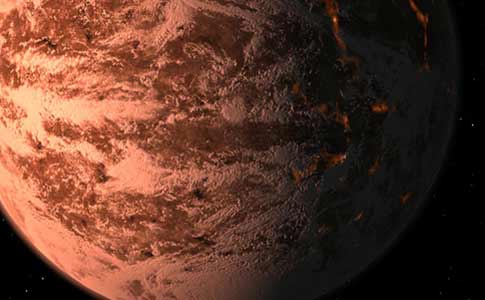 Small Like Us
Planets found outside of our solar system tend to be mammoth orbs more than 15 times as large as Jupiter. It’s not that rocky little worlds like ours don’t exist. It’s just that we have a tough time spotting them because of the glare of nearby stars. Now astronomers at the Keck Observatory in Hawaii have managed to find a planet some 15 million light-years away that is just seven times as large as Earth, making it the smallest extrasolar planet ever discovered.

Tail Wags Dog
The world’s smallest and cheapest space-based telescope, a suitcase-size Canadian observatory named Microvariability and Oscillations of Stars (MOST), has found the first evidence of a planet towing its own sun. Tau Bootis, as the sun is called, is 1.4 times as large as our own. Although the planet’s mass is just 1 percent of its parent sun, it forces the star to rotate in lockstep with its orbit.

Caught on Film
An international team of scientists has captured the first direct photograph of a planet outside our solar system using the European Southern Observatory’s Very Large Telescope in Chile. The image captures 2M1207b, an extrasolar planet more than 200 light-years away, or about 1.2 quadrillion miles from Earth.