Could we avoid the big one by setting off smaller quakes? 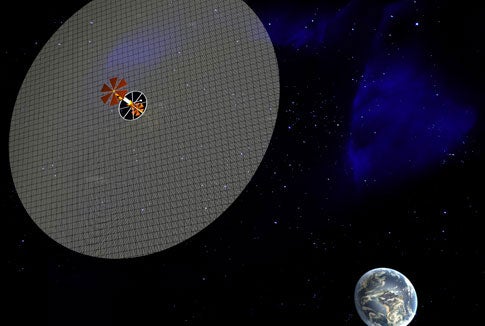 Stationed between the Earth and sun at a point where the gravitational forces nearly cancel each other out, a 600,000-square-mile space “mirror” scatters sunlight with a mesh woven of fine metal wires.

An earthquake is a sudden release of stress that has built up along a fault line, where rock faces push against each other. If that stress could be released over a longer period of time–with a series of smaller quakes–the result might be less catastrophic.

Engineers have known for 40 years that injecting fluids deep into wells can accidentally trigger mini–quakes by lubricating “sticky” rock faces. Since that time, there have been numerous proposals to pump fluids into stressed fault lines. But even if such a proposal could get past the inevitable legal and environmental hurdles, geologists warn that replacing one big earthquake with a swarm of smaller ones might actually be riskier.

William Ellsworth, chief scientist of the U.S. Geological Survey’s earthquake hazard team, points out that because earthquake energy multiplies with each point on the Richter scale, it would take roughly 1,000 magnitude–6 quakes to dissipate the energy of a single magnitude–8 quake. Another problem is that many fault lines are not discovered until an earthquake occurs.

Proponents of earthquake engineering argue that induced quakes would be safer than unplanned ones, because local residents and emergency services would have time to prepare for them. But most geologists aren’t convinced. Thomas J. Ahrens, a geophysics professor at the California Institute of Technology, cautions that mini quakes “may easily get out of control.”

Before geologists could create a controlled quake, they would need precise data about the shape of the underground fault, and how much friction has built up along it. Getting that kind of data is “an imaging problem that is unlikely to be solved anytime soon,” says Arthur Lerner–Lam, associate director for seismology, geology and tectonophysics at Columbia University’s Lamont–Doherty Earth Observatory.