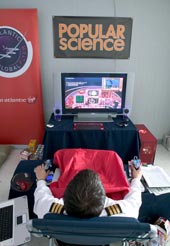 Kansas State University flight instructor Brad Amstutz jumped at the chance to simulate Steve Fossett’s round-the-world GlobalFlyer flight. The challenge presented by Popular Science: Take off at the same time as Fossett, fly the mission as if it were his own, and see if a simulated flight challenges him in the same ways the real flight challenges Fossett. His only rule is that if Fossett has to terminate his flight, Amstutz will also land.
Late Monday afternoon, when Fossett climbs into GlobalFlyer, Amstutz straps himself (figuratively, at least) into a reclining chair in the flight school’s lounge and takes the controls of a realistic virtual model of Burt Rutan’s innovative airplane, created by Aeroplane Heaven to run on Microsoft’s Flight Simulator 2004. A powerful, $4,600 desktop computer called Omen, developed by VooDooPC specifically for graphics-intensive gaming, serves as his engine, and Saitek’s X52 programmable flight controls stand in for the real aircraft’s stick and throttle.

Takeoff Amstutz lifts off uneventfully, though GlobalFlyer is “squirrely” on the takeoff roll. He takes a heading toward Chicago but quickly realizes that the simulator’s GPS navigation unit won’t allow him to program in multiple waypoints during a flight, so he’ll have to manually enter each one, instead of the autopilot automatically changing headings. Also, he can’t manually enter latitude and longitude waypoints, which Fossett is able to do (the simulator accepts only known geographic locations), so he’ll have to fly using headings and distances from certain waypoints to stay on course. Meanwhile Fossett encounters his own GPS worries, also caused by unfamiliarity with the specific GPS unit. Fossett lost the signal because the unit was searching for a specific type of GPS signal, WAAS, that is only available in the U.S. The two problems require similar strategies to solve and have potentially the same ramifications for each flight’s manual tracking and steering. While Fossett eventually sorts out his GPS, Amstutz can work only with what’s available in the program, and the system will allow only waypoint-by-waypoint flying if all the points are entered prior to takeoff.

First day Amstutz climbs to 35,000 feet much sooner than expected. He discovers an error in the virtual model that provides just 12,000 pounds of fuel, even though the tanks say “full,” instead of the real airplane’s 18,100. That makes his GlobalFlyer lighter and increases its rate of climb. Later, in his real flight, Fossett will also get to 45,000 feet much sooner than expected, revealing similar fuel troubles, again with the same ramifications: early ascent to the cruising altitude and a lighter, more efficient aircraft. Fatigue rears its head, so Amstutz takes a short 20-minute nap at 2 a.m. and goes to the bathroom-an agreed-upon luxury that Fossett doesn’t have. “I’m in a public place, so I really can’t pee in a bottle like him,” he writes in his journal. He has his first milkshake-French vanilla flavor, and “not too bad.” Near the coast of Africa, disaster: GlobalFlyer suddenly accelerates nearly 100 knots and disintegrates from aerodynamic stress. Turns out that under certain conditions, real-time weather updates in the simulator are executed instantly rather than gradually, in this case shooting the tailwind up faster than the vehicle could tolerate. Since this was an error in the program and not Amstutz’s fault, we restart the flight from the same point.

Second day Early in the morning, Amstutz drinks his fifth milkshake to try to fight off sleep, and increases his water intake to stay hydrated. When Fossett gets to 12,000 pounds of fuel, Amstutz adjusts his fuel load to match. Fossett’s mission control reveals the fuel loss he experienced during his initial climb, and Amstutz again matches his fuel load with mission control’s estimate. Late at night, over China, Amstutz hallucinates vividly. “I saw movement in my peripheral vision,” he writes. “I looked, and there was nothing there. I saw somebody run across the room, reflected on the monitor. No one was there. I was also hearing voices.”

Third day Amstutz starts across the Pacific as Fossett’s team struggles with its fuel situation. He takes a good 30-minute nap, which helps enormously, though he’s still feeling the effects of fatigue. For instance, he’s losing the ability to focus on people’s questions.

Landing Because the simulator suggested that Amstutz could make it with the fuel he had on board, he didn’t take the conservation measures Fossett did, including reducing speed to slow fuel consumption. He crosses into Kansas nearly four hours before Fossett does. After 62 hours in the “air,” Amstutz lines up on the 12,300-foot runway at Salina. The airplane isn’t well-balanced, though, and he crashes onto the runway. The model’s manual indicates that the simulator can’t replicate GlobalFlyer‘s unusual flight dynamics at low weight, so it recommends setting the fuel back up to 20 percent for landings. Two attempts later, he lands gracefully and taxis back to the hangar. Tired but pleased, he gets out of the chair and stretches his legs before going to watch Fossett’s equally happy return to Salina. 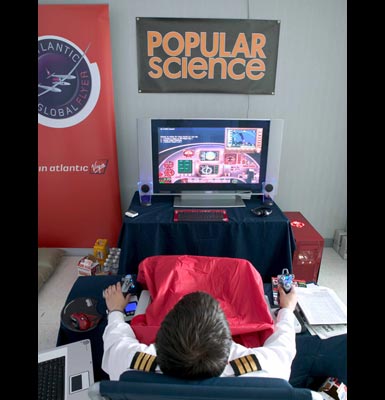 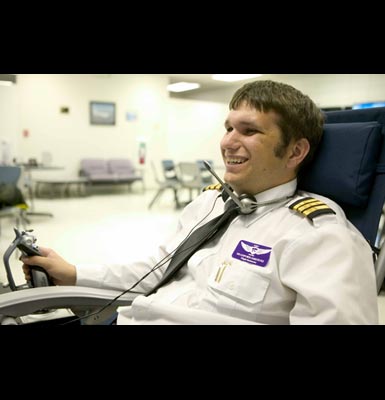 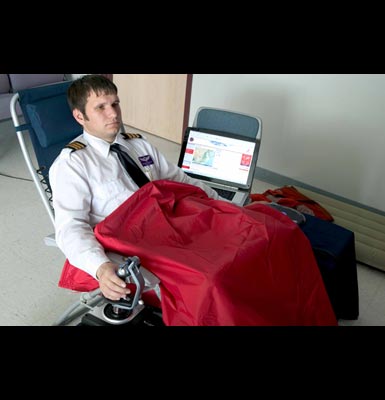