Orbital Holidays that Start with a Bang

Launching tourists into orbit safely will require lots of cash, lots of speed, and lots of smarts 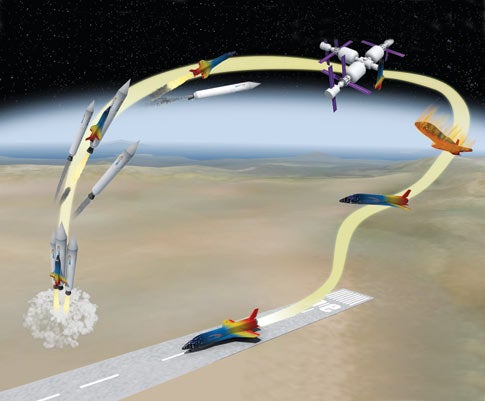 SpaceDev’s orbital vehicle will be a scaled-up version of NASA’s X-34. It will take off vertically, reaching 17,500 mph on its way to orbit, and then land on a runway.

It’s going to take a lot more than A Ford Econoline to deliver guests to the door of a space hotel. That’s why Robert Bigelow has established America’s Space Prize. Like the Ansari X Prize that Burt Rutan’s suborbital SpaceShipOne claimed last October, the Space Prize has simple rules. The craft must reach a 250-mile orbit twice in 60 days and demonstrate its ability to dock with a Bigelow module, and the second flight must carry five crew and passengers. No government funding is permitted, and only U.S. companies may enter. The deadline is January 10, 2010. The prize is $50 million in cash.

The rules may be simple, but winning will be hard. Achieving orbital altitudes and speeds is what makes spaceflight expensive. It starts with making a five-person vehicle move more than six times as fast as SpaceShipOne, which demands exponentially more energy and fuel: Rutan’s entire combo weighed less than 10 tons at takeoff, but Russia’s three-person Soyuz spacecraft requires a 300-ton rocket to loft it into orbit.

What comes up must come down, and Newton insists that it must come down with the same amount of energy it took to get it up there. The spacecraft must decelerate in the atmosphere, and its kinetic energy turns into steel-melting superheated air. Safe re-entry is a huge challenge; so far it has been done only with a glider like the space shuttle–which is expensive–or a parachute-recovered capsule.

Rutan is typically cagey about his work on an orbital craft, beyond saying that it might be a “small, cheap and cramped transfer van.” He has suggested that his White Knight carrier airplane could be scaled up to bigger-than-747 size to launch future rockets and that SpaceShipOne‘s unique “feather” design might play a role.

The most detailed plan comes from SpaceDev, which built SpaceShipOne‘s rocket engine. The design for SpaceDev’s Dream Chaser combines enhanced versions of that craft’s hybrid rocket motors–burning rubber and nitrous oxide–with a winged rocketplane based on the X-34 that was designed by Orbital Sciences and NASA. SpaceDev likes the X-34 because NASA already has a huge database on its aerodynamic performance; for NASA, it could be a chance to fly a useful research vehicle using SpaceDev’s proprietary rocket engines. CEO Jim Benson says the vehicle would be strapped to three million-pound hybrid boosters to go all the way to orbit. The key to this five-year, $150-million project, he says, is that hybrid rockets are “almost embarrassingly cheap” when produced in quantity. Benson hasn’t committed to
a try for Bigelow’s prize, however, and actually might not do so. He doesn’t think the private sector will fully fund an orbital project, which is why he’s working with NASA. “Who cares who pays for it,” he asks, “as long as we get a safe, affordable vehicle?”