The Daring Visionaires of Fringe Aviation

Will one of these aeronautical mavericks redefine personal flight? Probably not, but you can't blame them for trying. 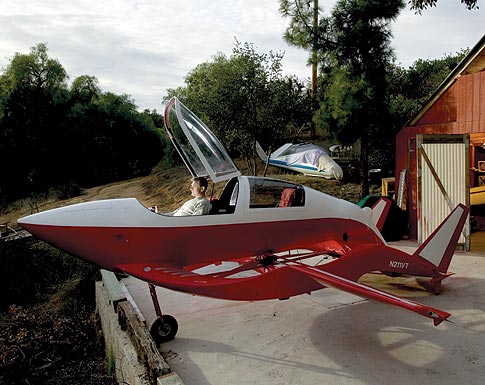 Attila Melkuti’s AMV 211 is designed to lift off vertically and pitch forward, until the wings become level, for horizontal flight. Is it a work of genius or a deathtrap? There’s only one way to find out…

In the bucolic hinterland North of San Diego, on a hillside shaded by eucalyptus and pine, Attila Melkuti pulls open the doors of a barn. Inside, light gleams off a strange and marvelous contraption he’s been piecing together for the past seven years. He pushes his nearly finished creation into the sun: a curvaceous, cherry-red flying machine that looks like nothing so much as the unholy union of a UFO and a Corvette. “The idea came to me in a childhood dream,” he says. “I believe it could transform aviation.”

Melkuti may be the only one who so believes. His vehicle relies on a propulsion system–a ducted fan, essentially a propeller mounted inside a circular housing–that has been tried many times by large and usually very successful aviation companies and that has failed completely in each case. But Melkuti, an enthusiastic and eminently likeable Yugoslavian immigrant, is dedicated to his vision. He is part of a long line of inventors and would-be pioneers who set their sights on the sky, on bringing aviation to the masses and somehow reinventing flight. Every accomplishment and advance in the field of aeronautics, they argue, began with a challenge, probably one most people thought was unconquerable. The Wright brothers were the first of the breed, and Burt Rutan–with his many innovative aircraft designs as well as SpaceShipOne, the main vehicle in the world’s first private manned space program–is the most recent.

The problem is that there have been few successes between these two examples. “It’s hard to make something new and different, and make it work well,” says aerodynamics author and lecturer Martin Hollmann, founder of Aircraft Designs, an airplane design firm. “That’s the reason you don’t see many new things out there.” While designers promise stunning performance advances, what they most frequently achieve are delays, endless financial crises, and test-flight crashes. In the worst cases, pilots–often the designers themselves–die. But that’s not entirely unexpected in this crowd, which, after all, includes many competent and level-headed pilots who know the risks they’re taking. “I put my heart and soul into this airplane,” Melkuti declares. “If anyone’s going to crash it, I will.”

For the most part, it’s not crackpots, or even eccentrics, who populate the fringes of aviation design. These are dedicated engineers and entrepreneurs who see a gap and wish to fill it, using technology that they have tweaked and honed, improved designs that may finally be optimal and strategies that big aero firms may simply have never thought of. Also in the mix: some obsessed amateurs and, yes, a few smooth-talking rogues. All are in hot pursuit of great ideas that just might–or might not–take off.