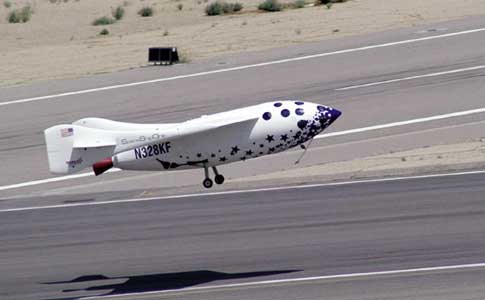 When Brian Binnie piloted SpaceShipOne, the world’s first privately built spaceship, to 367,442 feet in October, he wasn’t just gunning for the $10-million Ansari X Prize. His flight was about the future of space tourism, and quite a few potential customers were watching on television. Just five days before Mojave Aerospace Ventures captured the prize–for reaching suborbital space twice within two weeks–billionaire Richard Branson announced he would soon begin selling tickets for the first-ever commercial space airline. The new company, Virgin Galactic, will operate a fleet of spaceships based on Rutan’s technology. “This is the most significant development [in human spaceflight] since the Apollo moon landing,” says Tony DeTora, executive director of the Space Frontier Foundation. And some potential tourists, including former Jane’s Addiction guitarist Dave Navarro, are already promising to lay down the cash. How much? Virgin Galactic says a space jaunt will cost $190,000, which will get you a week of preflight training and a three-hour vertical cruise complete with three minutes of weightlessness. Start saving: The maiden ship, the VSS Enterprise, is slated to take off in 2007.