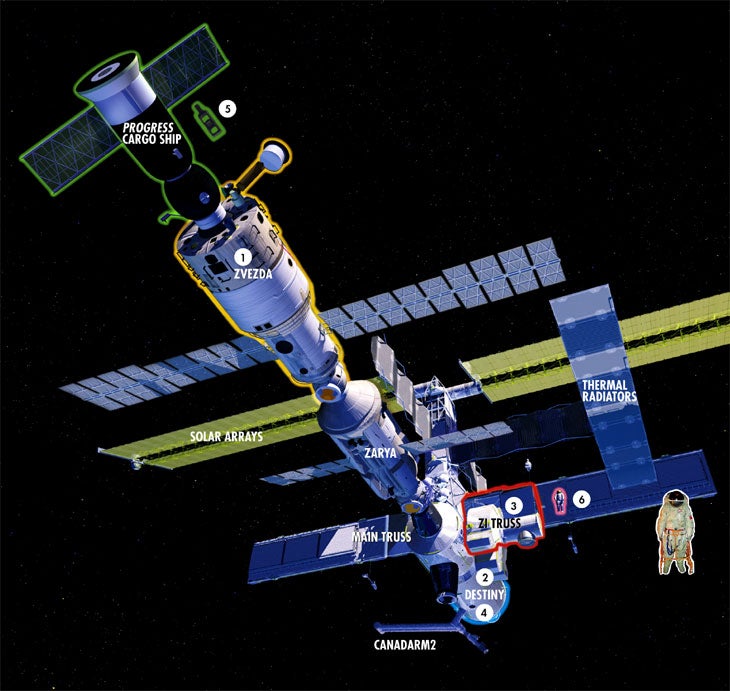 You might think that astronauts living onboard the International Space Station spend most of their waking hours observing Earth and conducting experiments. In fact, the bulk of their time is devoted to housekeeping: unpacking groceries, collecting trash, repairing everything from computers to the toilet, and slogging through mundane maintenance checklists.
It’s not surprising that equipment breaks down occasionally–that’s why the space station carries backup systems and spare parts. But now that the station has been permanently occupied for four years, it’s beginning to show signs of wear and tear. In recent months, astronauts have had to overhaul essential gear, including space suits, exercise equipment and an oxygen generator. “The ISS is a disaster waiting to happen,” warned a NASA flight controller in an anonymous internal survey done in 2003. But officials maintain that safety hasn’t been compromised and that patching up equipment is great training for future exploration missions. “Many of the operational techniques and processes we’re developing now, in order to operate without a lot of supply shipments, will be required for those longer missions,” says Bill Gerstenmaier, NASA’s program manager for the station. Here, a look at recent and future “training opportunities.”

1. Oxygen Generator (Zvezda)
The Elektron oxygen generator in the Zvezda Service Module has shut down repeatedly. The Russian-made machine uses electricity to separate wastewater into hydrogen and oxygen. When the Elektron isn’t working, astronauts have to rely on bottled oxygen or “candles” that release chemically bound oxygen as they burn; supplies of both are limited.

2. Environmental Sensors (Destiny)
Some of the sensors that monitor air quality have malfunctioned. While recently repaired sensors can detect major problems, equipment that detects trace contaminants, such as ammonia, is still broken.

3. Gyroscopes (Z1 Truss)
Four 600-pound, solar-powered gyroscopes control the station’s orientation. One gyroscope broke down two years ago. Astronauts repaired another one last July by replacing a failed circuit breaker. The station requires a minimum of two functioning gyros to keep it positioned.

4. Flex Hose (Destiny)
In January the crew traced a “pressure decay,” or air leak, to a double-paned window in the Destiny lab. To prevent fogging, a flexible hose allows air trapped between the panes to escape overboard. The hose, which was probably damaged by astronauts who used it as a handhold while looking out the window, has been replaced and covered with a box.

5. Nuts and Bolts
Astronauts were surprised to see a two-inch-long bolt floating away from the station in February. The bolt was probably used to hold a solar panel in place during the launch of the unmanned cargo ship Progress. The crew has occasionally observed other drifting parts, including a label for an electrical cable. None of the parts are essential, but there’s a risk that one could collide with the station.

6. Space Suits
The Russian and U.S. suits used for space walks have had cooling problems. Astronauts got a U.S. suit working again by repairing a broken pump. The fix was easier for a Russian Orlan suit, which fogged up because of a simple kink in a hose.

Skeleton Crew
With the space shuttle grounded, crew size has been reduced to two astronauts. During space walks, there’s nobody left inside to man the fort.

No Exit
NASA allows a
maximum of 90 minutes–one orbit of Earth–to evacuate in an emergency. If astronauts are doing construction, that may not be enough time.

Unplanned Obsolescence
The shuttle’s grounding has delayed station assembly. The life expectancy of the station is only 15 years, and some parts are already six years old.

Flawed Safety Culture
Critics charge that NASA has waived hundreds of safety requirements in its zeal to keep the station staffed, which could lead to another tragedy in space.