Fixing the ailing space telescope may be too risky for humans. Solution: hire a robot. 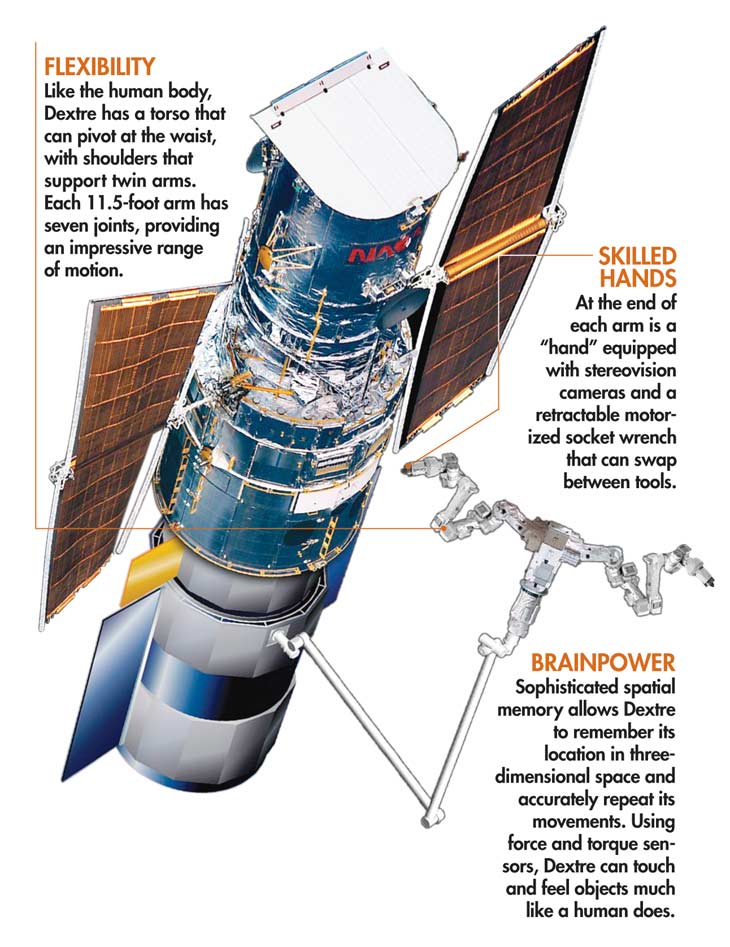 The beloved Hubble Space Telescope may get a new lease on life after all. Late last summer, NASA nixed its controversial decision to retire the aging instrument and instead will consider asking Congress for roughly $1 billion to plan and launch a robotic repair mission by late 2007.

The leading contender for a Hubble house call: a 3,664-pound, two-armed robot named Dextre. The robot, made by MD Robotics in Brampton, Canada, is about
the size of a small car and has multijointed arms equipped with a suite of lights, navigation cameras and repair tools. Originally designed for delicate repair work on the exterior of the International Space Station, Dextre already has most of the technology it would need to patch up the telescope. A retractable motorized socket wrench and handlike jaws, controllable by astronauts in orbit or on Earth, can grip objects from small tools to hardware up to 1,327 pounds. The chores include opening and closing toolboxes, changing batteries, and precisely positioning objects.

NASA may not make a formal decision on Dextre until early next year, but it’s a race against time, with Hubble’s fine-aiming gyroscopes and batteries expected to expire by 2008. Adding to the urgency, one of Hubble’s main instruments, an imaging spectrograph that peers at distant galaxies and black holes, conked out this past August.