Three video renderings of the biggest, brightest explosions yet proved to exist 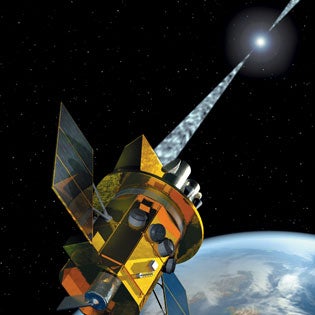 On March 29, 2003, the High Energy Transient Explorer (HETE) satellite detected an unusually bright gamma ray burst a mere 2 billion light years away (hey, that’s very close for a GRB). The event yielded new insight into a topic shrouded in mysetery and dominated by theoretical models since the 60s. The afterglow of this explosion gave scientists convincing evidence that hypernovas–the Collapsar model, so named by Dr. Stan Woosley because the implosion of a massive star’s core into a black hole triggers the event–are responsible for at least some GRBs.

**THE COLLAPSAR MODEL IN ACTION

A Massive Star Explodes After Core Collapse**
onClick=”window.open(”,’popup1′,’height=360,width=360,scrollbars=yes,resize=yes’)” target=”popup1″ class=”sidebar”>QuickTime video
A helium-burning star around 10 times the mass of our sun has reached the end of its life-cycle, and the iron core has collapsed into a black hole. Jets of matter moving at up to 99.999% the speed of light travel from the collapsed core and erupt from the star’s poles. Twin explosive shockwaves expand from the jets to meet each other (visible as expanding cones of gas in the clip), shattering the star. The mass lost in the supernova is roughly double what ends up in the black hole.

Collisions between the particles within the jet produce gamma photons, creating a flash visible up to around 5 degrees from the axis of the jet.

Core Collapse in Cross-Section View**
onClick=”window.open(”,’popup1′,’height=360,width=360,scrollbars=yes,resize=yes’)” target=”popup1″ class=”sidebar”>QuickTime video
The layering of the core illustrates different stages of fusion. The fusion of silicon into iron marks the end of the road. Even this massive blue star lacks the heat to ‘burn’ iron, so the core (the size of earth and 1.5-2 times the sun’s mass) can no longer produce energy. At this point, the iron core collapses on itself, producing a black hole. The black hole’s gravity flattens the surrounding matter into a disk that (like the star) rotates.

A Relativistic Jet in Simulation**
onClick=”window.open(”,’popup1′,’height=360,width=360,scrollbars=yes,resize=yes’)” target=”popup1″ class=”sidebar”>QuickTime video
This animation shows the progress of the blast-wave as it travels from the forming black hole and passes out of the star. The simulation is color coded according to the density of matter, yellow being the most dense, red and blue the least. As the jet pushes against the material in the star’s outer layers, a cocoon forms around it and moves outward at a lesser (but still tremendous) speed. Collisions between relativistic particles (those traveling at more than 90% the speed of light) produce the gamma photons, but the gamma rays do not escape until the jet has traveled for 1,000-10,000 stellar radii.